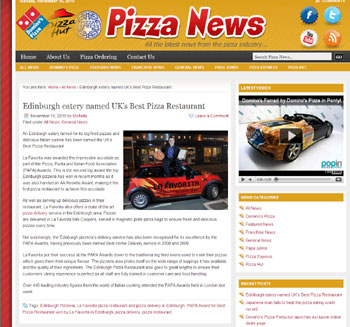 Pizza News reported on how La Favorita had been named the UK pizzeria of the year at the prestigious Pizza, Pasta and Italian Food Association (PAPA) awards, which were announced recently in London.

The restaurant fought off stiff competition from other popular pizzerias across the UK at the PAPA awards, including previous platinum award winners Tamburino in Yeovil and Glasgow’s Bar Napoli. The latest accolade comes just weeks after La Favorita won a second prestigious AA Rosette award. In 2009, it became the first pizzeria in the UK to be awarded a rosette rating by the AA.

The coverage can be viewed on the Pizza News website and was the result of a PR in Scotland campaign maintained by the Holyrood PR.