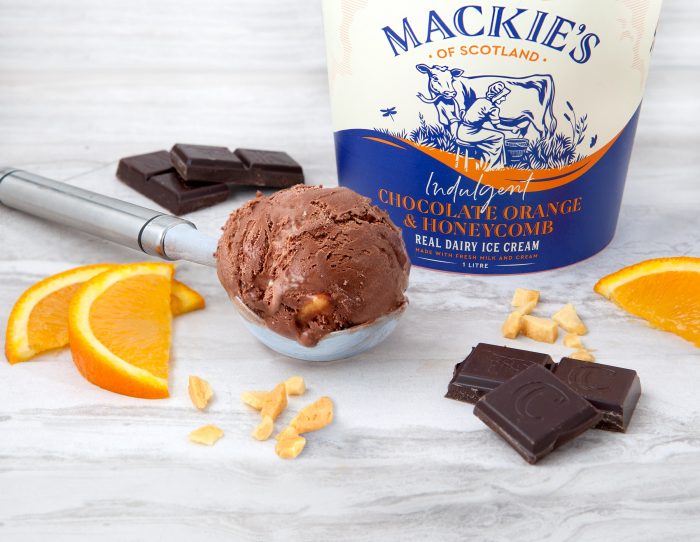 ONE of Scotland’s most renowned ice cream brands is launching a new flavour for the summer, the tenth flavour now available in the current range of family sized 1 litre tubs.

After the success of its orange chocolate bar last year,  Mackie’s of Scotland is launching a chocolate orange and honeycomb ice cream this month.

The zesty new flavour of ice cream is made with Mackie’s own dark chocolate, infused with real Jaffa orange for a natural zingy taste with molten little pieces of Honeycomb adding a balancing sweetness.

Initial popularity with listings means the flavour will be available across Scotland in Coop, Sainsbury’s, Tesco and Iceland.

Development Director, and one of three sibling owners of Mackie’s of Scotland, Kirstin Mackie said: “We were blown away by the success of our orange milk chocolate bar last year, so naturally a chocolate orange ice cream had to be the next step.

“Orange chocolate is a popular trend in confectionery at the moment and putting that into an ice cream for summer makes perfect sense!

“We knew our next limited edition ice cream had to be truly special and this flavour is just that.

“It’s a celebratory mix of some of our favourite ingredients – little sweet honeycomb pieces melting into the creamy Chocolate Orange ice cream.

“We trialled many different combinations to achieve the right balance of taste between the three ingredients and then there was an internal debate on how to best name the new flavour – the dilemma being, in which order would you use the three words to describe the flavour!?

“We’re looking forward to hearing feedback from our consumers – but I have to say that it’s possibly my favourite flavour yet!”

The brand’s own dark chocolate, made in the chocolate factory and hand-made honeycomb from its ‘sweetie kitchen’ is blended into ice cream made with milk and cream fresh from Mackie’s own cows – fitting with Mackie’s environmental ethos to make ice cream from “sky to scoop” on the farm, with farm produced ingredients, packaging and renewable energy. 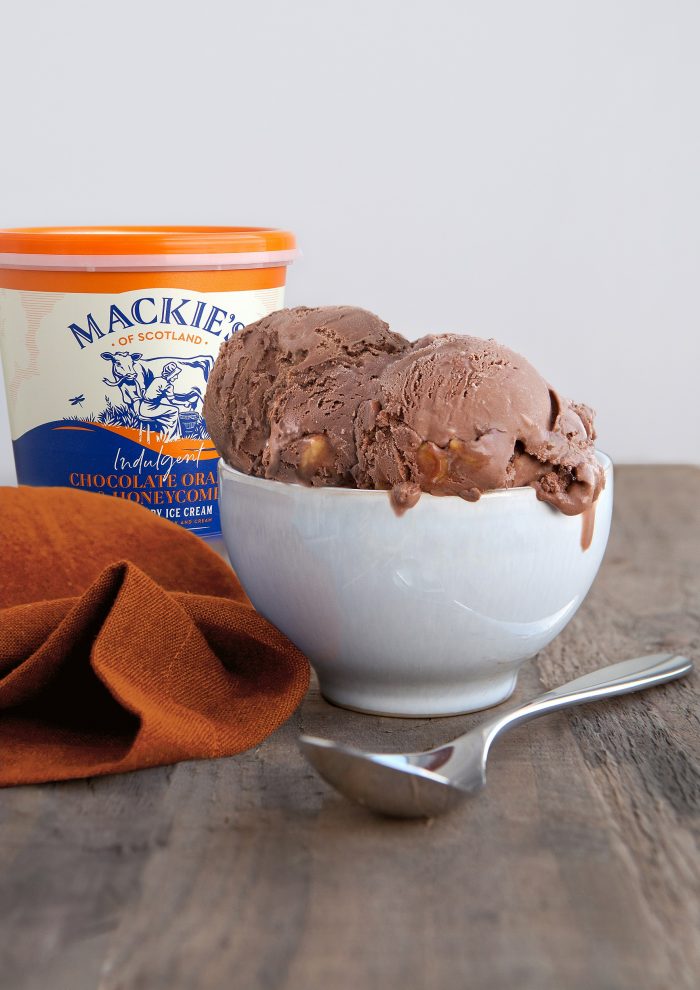 The Chocolate Orange Honeycomb ice cream is the first product in store displaying the new brand look for the company’s Indulgent range.

Mackie’s recently revealed its biggest rebrand in 30 years which includes new packaging and a new website, focussing on the company’s farming heritage and their product’s ‘dairy difference’.

The fourth-generation family farm where Mackie’s is based, Westertown, is in North East Scotland – and Mackie’s still produce all their ice cream using fresh milk and cream from their own dairy herd on the farm.

Mackie’s sky to scoop ethos sees it create everything from milk to its packaging on site, powered predominantly by their own renewable energy – via four wind turbines, a 10-acre solar farm and a biomass energy plant. In addition, a £4.5million project is underway to install an innovative new low-carbon refrigeration system, set to be among the greenest in Europe and the first of its kind in Scotland.

Are you looking for food and drink PR to help boost your business? Find out how our team can help you below.

Getting in touch with our team of food and drink PR experts couldn’t be easier. Simply give us a call on 0131 561 2244 or take a few minutes to fill in the form below and one of our food and drink PR team will get straight back to you: