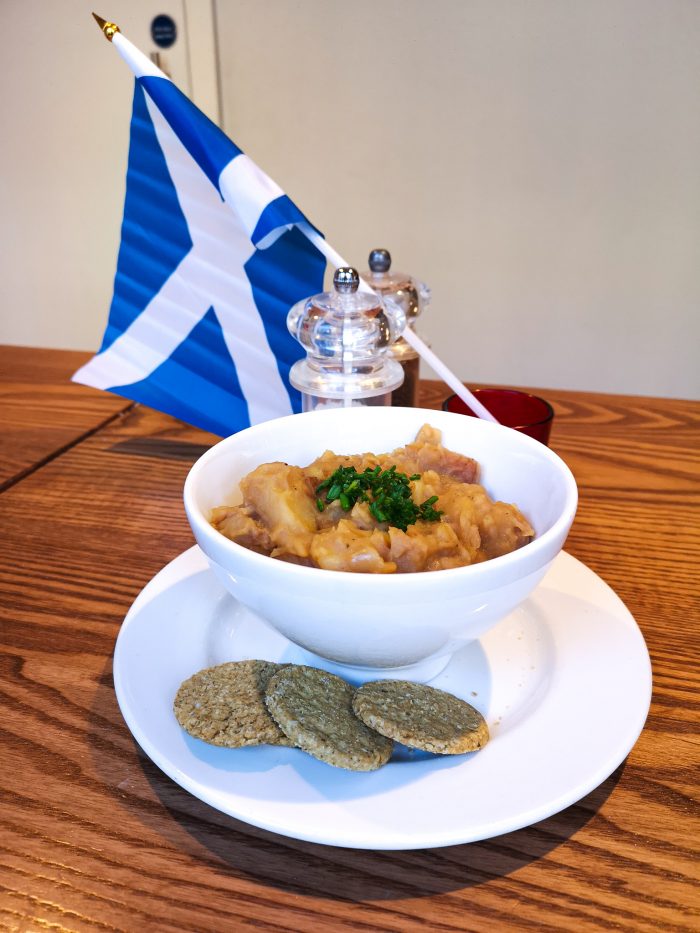 AN EDINBURGH-BASED café has extended Burns Night to the entirety of January in a bid to celebrate a traditional Scottish delicacy – stovies.

The team of professional chefs at Café 1505 on Nicolson Street have been recreating traditional stovies recipes alongside new concoctions sent in by members of the public.

46-year-old Sarah said: “My stovies recipe dates all the way back to the 1890’s (and actually probably further back) when my Granny Murray developed it to the taste buds of her 13 children.

“My brother and I grew up eating my mum’s version of Granny Murray’s stovies. I remember she told me it was what they made back when she was young as it could serve as many as they needed to.

“All throughout the cold winter months, and any time we were unwell, a big pot of stovies was always the answer in our house.

“I make stovies all the time as I have a big family, and also at New Year because it keeps my Mammy’s and Granny’s recipe alive.

“My dad is 82 years-old and he still makes stovies at least once a week as it keeps the memory of my mum in his mind – the taste also helps him reminisce about the good old days!”

Another recipe submitted will raise some eyebrows among the traditionalists – stovies with a Chinese twist.

Iain Woodhouse, Professor of Applied Earth Observation at The University of Edinburgh, has followed his Scottish/Chinese fusion stovies recipe for the past 30 years.

He said: “The origin of this stovies recipe goes back to when I was a Masters’ student at the University of Dundee where I shared a flat with friends Nachiappan, from Madras, and Sai Nin, from Hong Kong.

“As a trio, we really enjoyed experimenting with merging traditional dishes from our cultures. Most of the time they were a disaster – especially our disastrous attempt to stir fry haggis.”

“However, my mother’s recipe held out the test when we began to add Chinese flavourings to her traditional stovies recipe.”

52-year-old Iain added: “When someone hears about the recipe for the first time, they’re normally intrigued and usually follow up by asking me to make it for them.

“From experience, it’s a dangerous recipe – once someone has tasted the Chinese-flavoured stovie they always ask for the recipe and rarely go back to eating them the traditional way.”

Café 1505 is owned by the Royal College of Surgeons of Edinburgh (RCSEd) and owes its name to the year of the historic institution’s inception.

Erin Brown, Marking Executive at Surgeons Quarter, said: “It’s been great to see all the recipes come in with their unique stories and backgrounds.

“Sarah’s story will have resonated with many people, including myself, as a lot of us follow a recipe that has been passed down through generations.

“As soon as we saw Iain’s twist on the traditional stovies recipe we were instantly intrigued – not even our professional chefs had heard such a unique take on the recipe.

“Our month of stovies has been received better than we ever could have imagined – we’re thrilled that so many members of the public have got involved from all over the UK.

“I think many more Edinburgh residents will start experimenting with their stovies!”

At the end of the month, the Café will use customer feedback and sales figures to award the city’s ultimate recipe – crowning a member of the public as Edinburgh’s stovies Queen or King.

CAN OUR FOOD AND DRINK PR TEAM HELP BOOST YOUR BUSINESS?