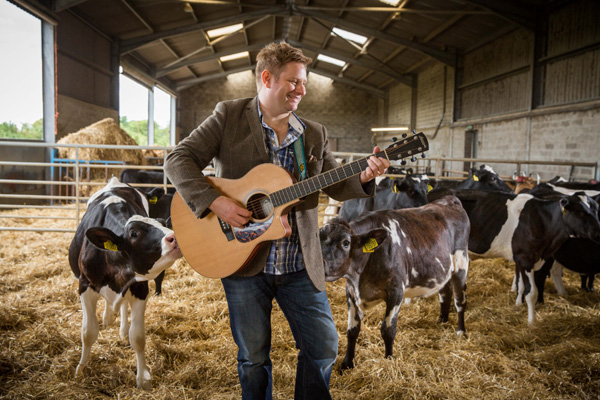 THE RESULTS from a test to see how a Scottish dairy herd would respond to country music are in – with the evidence suggesting that the tunes had a real impact on the cows’ behaviour.

Mackie’s of Scotland – with the help of Colin Clyne, a local musician and founder of Stonehaven’s “Doricana Fest” – created a soundtrack of tunes to play to a 45 strong sample group of its herd, for a fortnight, from late August into September.

Analysis of the data from the automated milking station with the music playing, reveal that the total yield of the sample group dropped 3%, with all but one cow producing less milk in that time.

Despite the reduced yield, 73% of the sample group actually increased visits to the milking robot during the musical fortnight, paying on average nine further visits, suggesting that the cows were interested in the music – with one cow even visiting 90 additional times.

Karin Mackie, Marketing Director and one of three sibling owners at Mackie’s, said: “It would certainly seem that the cows did enjoy the music and all of our team working directly with the cows noted how content and curious they all appeared.

“The fact they were visiting the source of the country tunes much more frequently is very interesting – perhaps the music made the cows generally more active, but who knows, they could have been dancing!”

Mackie’s has around 300 milking cows of which 265 were milking during the month of August. The overall average milk yield is around 33 litres a day and over 260,000 litres of whole milk is produced on site each month for use in the ice cream dairy on the farm.

There was one cow that upped its yield, milking after her first calf and pregnant with a second calf due in March next year. Her average daily milk yield increased by one litre over the test period. She also visited the milking unit more often, ten times more in the musical fortnight.

Lesley Skene, Mackie’s Farm Administrator said: “If we are to judge an increased yield as a sign that a cow liked country music, then we have at least one big fan among the herd, who perhaps we’ll have to re-name ‘Emmy-moo’.

“I couldn’t believe it once the data had been analysed as I had spotted her in particular moving in to enjoy the silage in the spot closest to the music source.”

Karin added: “This admittedly started off as some fun to celebrate our partnership with the Doricana Fest – but we did our best to keep it as scientific as possible and because all the cows here milk themselves, we were able to leave them free of any human influence other than Colin’s singing. 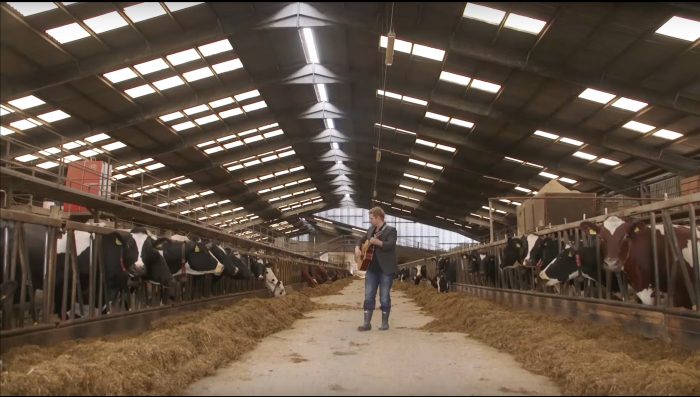 “The high-tech stations also enable us to measure all the milk by the millimetre and recognise each and every cow, so we really can distinguish between the fans.

“The findings are very interesting – they do suggest that our curious cows have been affected by the music. Although the yields are down we are considering expanding the trial and investing in more suitable overhead speakers for the byre.

“One thing the findings don’t tell us is whether the cows prefer country music, the jury is still out! It’d be fun to see if we can successfully replicate the earlier study where millk yields were enhanced by playing soothing classical music.”

Colin Clyne heads up the Doricana festival and approached Mackie’s after spotting its Doric promo boards at the Taste of Grampian festival.

Colin, a multi-award winning and well travelled country musician, said: “The family and I made the move back to Scotland to connect with our roots but I couldn’t resist bringing a little flavour of the States back with me in the form of Doricana Fest.

“It has certainly been fun visiting the experiment on the farm. It’s not my usual type of rehearsal space. I won’t be worrying about the milk yield too much, as long as the cows are enjoying the music!”

Doricana Fest is a one day, family friendly Americana music festival and will take place at the Stonehaven Town Hall on October 8, 2016 from 4pm – featuring six renowned Scottish acts including Edinburgh’s The Holy Ghosts and The Malpaso Gang from Aberdeen.

Mackie’s of Scotland produces over 11 million litres of milk each year, used to make its famous ice cream and part of its ‘sky to scoop’ philosophy – which also sees the Aberdeenshire firm produce everything from renewable energy to its own packaging.

Firmly established as one of the UK’s most popular take-home ice creams, Mackie’s diversified into making crisps in 2009, and chocolate bars in 2014. The firm opened a dedicated £600,000 chocolate factory in March this year.

FIND OUT HOW YOUR BUSINESS COULD BENEFIT FROM THE EXPERT FOOD AND DRINK PR SERVICES OF OUR AWARD WINNING AGENCY.