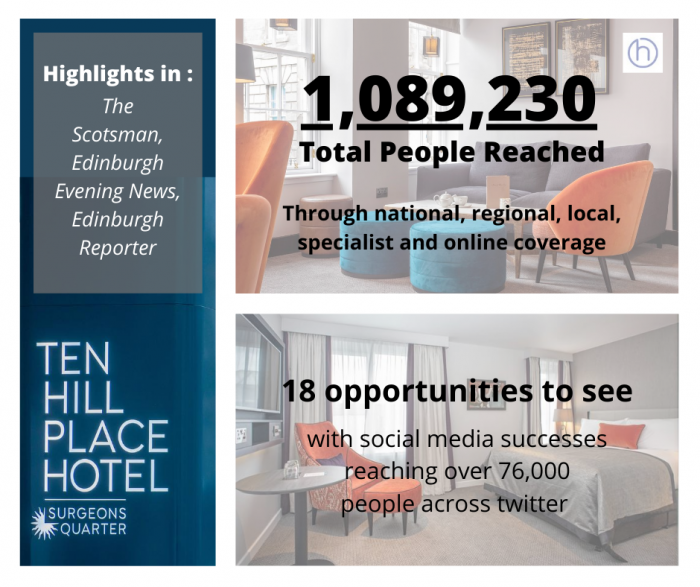 Ten Hill Place, which included the redecoration of 61 rooms, was completed just in time for its opening on July 15.

The four-star hotel underwent its first expansion in 2018, increasing the number of rooms from 77 to 129 following record occupancy numbers. The revamp brought the remaining rooms entirely in line with the beautiful redecoration which accompanied the expansion.

Part of the refurbishment has transformed a public area of the hotel into a “Big Snug”, a private space with capacity for 50 diners, and concluded work on 40 bedrooms.

The story was a featured in a number of specialist and trade outlets, as well as regional, national and local publications.

The refurbishment was also a hit on social media, with twitter posts from The Edinburgh Reporter, Invest Edinburgh and Hotel Owner.

Ten Hill Place is owned and managed by Surgeons Quarter, the commercial arm of the Royal College of Surgeons Edinburgh. All Profits made from the hotel go towards the Colleges charitable objectives of improving education and access to surgery to save lives across the world.

During the height of the pandemic, Ten Hill Place remained open to provide free accommodation and meals to NHS frontline workers. This allowed the hotel to adopt strict safety measures which they have upheld since its reopening.

You can read the original press release here.