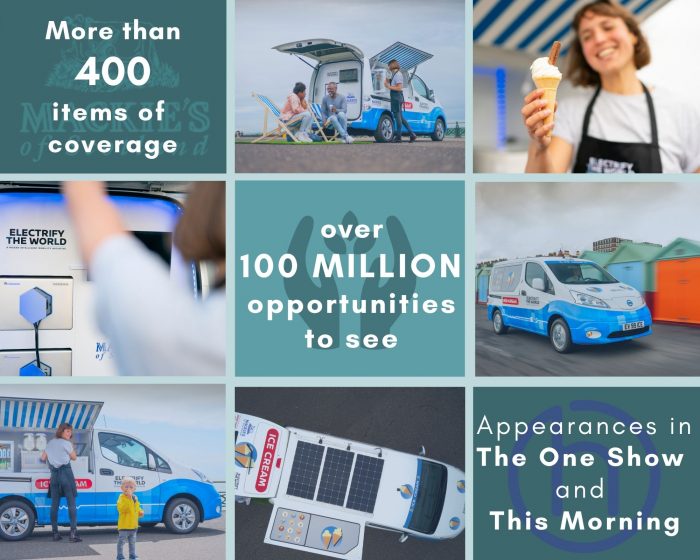 MACKIE’S of Scotland quickly became the coolest brand around after Nissan launched its’ zero-emissions ice cream van campaign in partnership with the Scottish business in 2019.

Family-owned Mackie’s has been a leading advocate for renewables for several decades, boasting four large wind turbines, one of Scotland’s largest solar farms, as well as a range of biomass heaters. It is even gearing up to be carbon positive for the first time this year.

Far-reaching media coverage resulting from its impressive green activity led Nissan, one of the world’s largest and most recognisable brands, to initiate contact with Mackie’s, to realise its dream of producing a zero-emissions no ICE (internal combustion engine) ice cream van.

We then worked alongside Nissan’s in-house and agency teams to finalise a story and media package that delivered astonishing results, including:

Later in the year, the van and its supporting campaign received ‘Innovation of the Year: Technology’ and ‘Energy Efficient Partnership of the Year’ awards for Nissan with its partnership with Mackie’s

If you would like to read more about these awards, the original press release can be found here.

If you think this is something you could benefit from, don’t hesitate to reach out and ask any questions you may have.

You can reach us on 0131 561 2244 or alternatively, you can fill out the short form below and we will get back to you promptly.