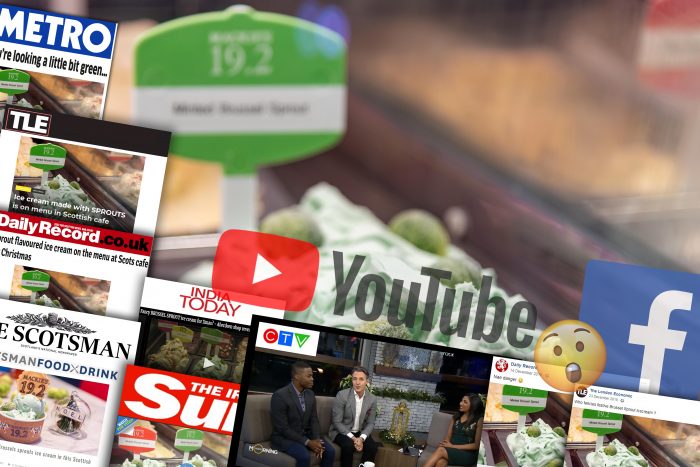 MACKIE’S of Scotland recently went international when they added Brussels sprout ice cream to their festive menu in the run-up to Christmas.

The family ice cream company treated veg lovers to the limited edition Minted Brussels Sprout ice cream at Mackie’s 19.2 parlour in Aberdeen – and we made sure that their fun experimental flavour had tongues wagging across the globe.

We told the story to the media with a carefully crafted press release and accompanying video that landed some pretty sweet coverage that just kept sprouting up.

Such widespread coverage not only gets Mackie’s name recognised and part of conversation, but also helps build awareness of Mackie’s as a fun, creative brand and drive sales in the parlour.

This isn’t the first time that we’ve helped Mackie’s wow the media with their parlour. Read more about that here and here.

DOES YOUR FOOD AND DRINK BUSINESS WANT INTERNATIONAL VIRAL SUCCESS?

Get in touch with one of our experts to find out more about how our public relations work could benefit your business.