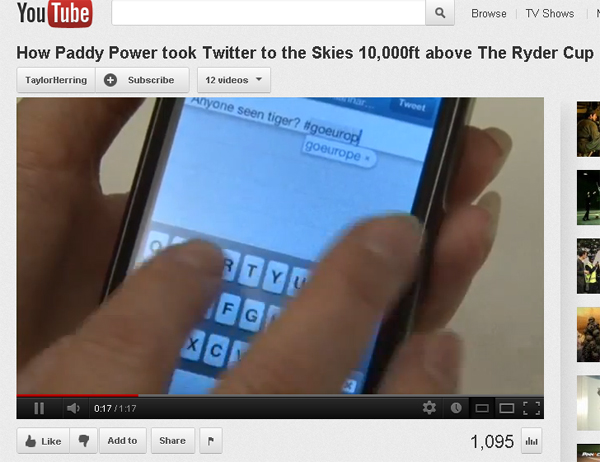 Irish bookies, Paddy Power are no stranger to a good PR initiative – we all know the Paddy Power jockey riding the Uffington White Horse stunt – and their latest campaign ‘Sky Tweet’, which involved them hijacking the sky above The Ryder Cup did not disappoint. Paddy Power asked individuals to tweet messages of support to the Europe team using the hashtag #goeurope, they were then written 10,000ft up in the sky by stunt pilots using cloud vapour. Grabbing the attention of Ryder Cup stars such as Rory McIlroy the stunt will also see Paddy Power gain the Guinness World Records for ‘World’s Biggest Tweet’ and ‘Biggest Skywriting’. It also looks as if the tweets of support paid off with the Europe team clinching victory over the US in what everyone is claiming was a very exciting Ryder Cup 2012.
http://prexamples.com/2012/09/tweets-written-in-the-sky-by-paddy-power-stunt-planes-to-support-team-europe-at-the-ryder-cup/

Calling all cool campers – ever wished there were an alternative sleeping solution to leaky tents that are a nightmare to put up when inebriated and are next to impossible to find when surrounded by all the others littering the festival camp site? Well, the solution has arrived – Blow Up Backseat Beds. Featured on trenhunter.com these ingenious, blow up devices fit snugly over the back seats of your car – so unless, like me, you are a giant, they provide the perfect comfy camping companion.
http://www.trendhunter.com/#26​

JK TOO GOOD FOR SPACE (Gaynor)

She’s been in the press for the last week about her new adult book ‘The Casual Vacancy’, but it seems J.K Rowling has attracted attention for a different reason today. After being offered the trip of a life time to space by Richard Branson, J.K revealed she turned the offer of a £2m seat on the shuttle down. I’m not sure if she’s crazy or just really down to earth or maybe she feels more comfortable spending her own hard earned cash on such extravagances.
http://www.scotsman.com/news/odd/harry-potter-author-jk-rowling-said-no-to-space-trip-1-2556736

LOVE IS IN THE AIR (Lisa)

I’ll be honest I’m a bit of an old school romantic, so this definitely pulled at my heartstrings. A pilot took his girlfriend out in a private plane and rather than go for a straight proposal he staged a plane malfunction and got his co-pilot girlfriend to read through the safety manual which he had altered to read “will you marry me?” If you are feeling a bit soppy today then this video will definitely tip you over the edge…
http://www.thepoke.co.uk/2012/09/30/in-descent-proposal/

Earlier this year, a nine year old school girl from Lochgilphead, Argyll found herself at the centre of a media storm after her local council banned her from taking photos of her school dinners for her blog, Never Seconds.
She posts regular reviews of her school lunches giving them a rating in terms of nutrition and size.
The ban was soon overturned after the furore it caused and she went on to raise £114,000 for charity via her Just Giving page from people all over the world touched by her story. Martha Payne has now travelled to Malawi with the charity Mary’s Meals to visit the school constructed in her honour.
http://www.bbc.co.uk/news/uk-scotland-glasgow-west-19777092