Five Of The Fifth’s Fabulous Links 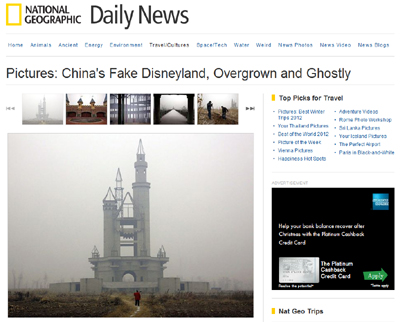 If you enjoyed today’s links or have any suggestions for tomorrow’s, please let us know on our Facebook or Twitter pages.

China is well known as the production hub of fake goods and in the late 1990s a property developer decided to take this to new heights and began construction on a replica of DisneyWorld 20 miles outside of Beijing called Wonderland.
A land disagreement before the completion led to its abandonment and it was left to decay and become overgrown with vegetation.
A Reutars photographer recently re-discovered the site and took a series of ghostly photographs to illustrate the property market problems currently China is facing.  Across the country there are apparently numerous vacant cities and luxury mall developments due to over ambitious investments.
http://news.nationalgeographic.com/news/travelnews/2011/12/pictures/111222-china-fake-disneyland-disney-world-travel/

For anyone who has seen the Will Ferrell film ‘Anchorman’ then the term ‘I Love Lamp’ is funny and everyone gets it. For those who have not seen the film, watch it and find out why this is funny. One of the scenes in the film show Ron Burgundy (Will Ferrell) reading from his teleprompter and apparently he reads anything and everything that is written on it. This results in Burgundy swearing on live television. Surely this couldn’t happen in real life, right? Poor Brian Niznansky of the local NBC channel WGBA was left red-faced after her was tricked into saying ‘I love lamp’ on live television. His co-host bursts into fits of laughter and says ‘Oh my god, he totally fell for it’. Have a watch for yourself.
http://www.metro.co.uk/weird/886415-newsreader-says-i-love-lamp-on-air-after-being-pranked-anchorman-style

It’s been a strange few days in the world of football. Many teams have been suffering from New Year hangovers and, as a result, there’s been a number of freak results at the top of the Premier League and some bizarre refereeing decisions that have left managers tearing their hair out in despair. Last night, however, saw probably the most unusual event yet: a 100-yard goal scored by Everton keeper Tim Howard. Admittedly it’s not the first time a goalie has scored in a top flight match, but it’s still a rare occurrence and this is one of the more impressive efforts from throughout the years. And it’s very funny to watch – unless, of course, you’re a Bolton fan…
http://www.businessinsider.com/tim-howard-goal-2012-1

Amazing photographs charting 150 years of American history are kept safe in Iron Mountain, Pennsylvania. The former mine has been turned into a security facility and its filing cabinets house the priceless collection of images of picture agency Corbis, which is now owned by billionaire Microsoft founder-turned-philanthropist, Bill Gates. It’s worth taking 10 minutes to flick through this gallery of some of the images. I presume that this amazing location was the inspiration for naming the UK Document storage company, Iron Mountain.
http://www.cbsnews.com/2300-500202_162-10010492.html?tag=contentAux;cbsPostCarousel

THE THING VS PINGU (Aimee)

I rewatched John Carpenters’s remake of The Thing and forgot how good it was. Some proper gross out gore which isn’t for the faint-hearted but what if it was adapted by claymation Pingu stylee? Lee Hardcastle has done just that and it still looks messed up, penguin guts all over the shop but very entertaining.
http://io9.com/5872899/what-if-the-thing-starred-the-beloved-claymation-penguin-pingu