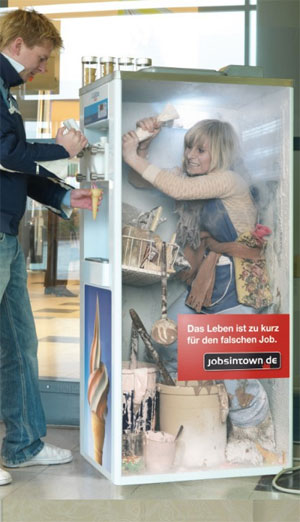 Every day the team at Holyrood PR share five of our favourite links, including quirky  stories, eye catching pictures, clever videos and other trending web topics.

Even after 50 years of advertising overkill, there is still room for creative brilliance to shine through.
This ad campaign is eye catchingly brilliant thanks to the superb photography and the unexpected delivery – and the genius of whoever came up with the very clever concept.
The result? This series of ads perfectly sums up the message from the German recruitment experts that life’s too short to be stuck in the wrong job.
Amazing Photos of ‘Life’s Too Short’ ad campaign

TODDLER FOR SALE JOKE IS A STEP TOO FAR (Pamela)

In an attempt to be funny, a woman from Michigan posted an ad on Ebay asking people to bid to a her two-year-old who was in her care.  Police were only alerted after a member of the public made a bid of $1,000 (£618) that was quickly accepted.  On being questioned, the child’s female carer said people were taking her joke way too seriously and that she just wanted to see how the ‘reserve met’ application worked on the site.  Thankfully, the girl was found safe and was immediately returned to her mother.
Woman investigated by cops over baby sale ‘joke’

There’s no smoke without fire and design house Yves Saint Laurent (YSL) is certainly firing up the headlines today after launching their range of designer cigarettes. Whilst tobacco advertising may be banned in the US, YSL have created a cigarette brand which comes in a sleek black box bearing their world renowned golden logo in order to promote in Asia and Russia – where smoking advertising laws are more relaxed. In fashion smoking may be seen as something chic and stylish with many of the world’s super models chain smoking in order to stay size zero thin, but in reality it this further from the truth. Rather than being glamorous it is an addiction which has been proven to lead to fatal diseases such as lung and throat cancer and respiratory ailments. It feels slightly uncomfortable that YSL are glamorizing the act of smoking – yes we may all want to look like the blonde bombshell smoking in their advertising campaign but the reality is we will probably end up looking dishevelled, discoloured and on deaths door after a lifetime of smoking. I know fashionsitas are often accused of being shallow but maybe YSL should think about the far reaching health implications of their adverts before they go storming down the runway!
Designer cigarettes from Yves Saint Laurent

STEPHEN FRY BAGS A SPOT WITH THE BAGGINS (Adrian)

He’s one of the UK’s most beloved actors and is beloved by nerds the world over for his roles in geek properties such as Harry Potter, the Hitchhikers Guide to the Galaxy and V for Vendetta.
But now, Stephen Fry has bagged another feather in his ever-expanding cap after being cast in Peter Jackson’s upcoming Hobbit films. Despite the delays that have affected production on the Tolkien classic over the past couple of years, the movies is now progressing with speed – and Norwich City fan and twitterphile Fry is the latest name to join its stellar cast as the “Master of Laketown”.
While his old comedy partner Hugh Laurie is scooping up awards in the U.S. for his role in House, it’s nice to see Stephen Fry keeping up and not just being remembered for the QI repeats that are constantly shown on Dave.
BBC report on Stephen Fry’s Hobbit role

On me ‘ead, son, was once the definitive cry during the football ‘set piece’ (a free kick, corner kick or throw in).
This amazing video shows how the humble set piece can take on extremes of theatrics – and still result in the ball finding the back of the net.
What start out looking like an embarrassing comedy of errors turns out to be a brilliant distraction technique. Bet this video (currently with 1.27m views) will be trending on YouTube over the next few weeks.
Stunning football set piece video