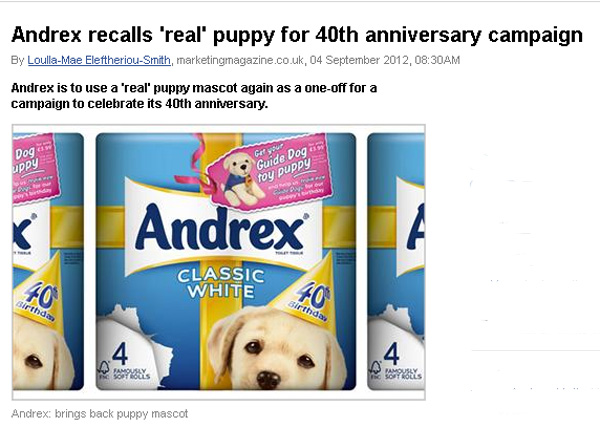 THE TOP DOG IS BACK (Gaynor)

Andrex has always been known for the adorable Labrador puppy in its adverts but in 2010 the toilet paper brand exchanged the real deal for a CGI version. Although I think the new ads are quite funny as the cartoon pups act like people, I am glad that Andrex has decided to reintroduce the real thing for its 40th anniversary campaign. As well as probably being very cute, the ad has a great purpose too- it will bring its partnership with the guide dogs charity to the forefront to help encourage consumers to help raise funds to train 40 guides’ dogs.

This amazing time lapse video was made by my former lecturer at Queen Margaret University, and it showcases some of the most iconic settings in Edinburgh. I am a big fan of time lapses and especially when they are produced to this high standard. In the video, we see the hustle and bustle of Princes Street, the tranquillity of a small stream down in Leith and, as expected, shots of the university. Wish he had shown me how to do this when I was at university!

In a clever move to get fans involved in their music, US band Linkin Park are allowing fans to personalise their new video for “Lost in the Echo”.
The viewer can submit their Facebook photos which appear in the emotionally charged storyline of the video, to often hilarious results.
Whether you are a Linkin Park fan or not – it’s fun to play around and see the character breaking down over a picture of a ham sandwich.

THERE GOES THE BRIDE (Lisa)

This Friday my best friend is getting married and I sincerely hope no one has any Romanian roots, as if they did they would attempt to cart her away in a mock kidnapping! A tradition in Romania, ‘Bride-napping’ occurs at the wedding reception and guests adorned with guns and scarves covering their faces grab the bride and take her to a famous location to demand a ransom from her groom. To me this seems bizarre and a truly horrible thing to happen to you on your wedding day, but the Romanian brides appear to embrace this tradition – smiling as they pose with their capturers and their guns. Rather them than me!

A BAG OF ONE’S OWN (Swantje)

My Handbag contains all the essentials, and not-so-essentials, objects of my life. Necessities range from my moleskine, purse, housekeys, lipgloss, pens to equally vital things such as safety pins, tissues and gum. Were I to have my handbag stolen, I would feel completely and utterly lost. That is exactly what a judge was concerned with last week in a court case – that the theft of a handbag could leave women at a serious risk of personal attack. But it’s not just about personal risk – the handbag stands for much more than that apparently – women’s emancipation and independence, according to this article in the Independent. That still doesn’t explain why I constantly feel the need to lug around a mini cosmetics and stationary shop with me though.