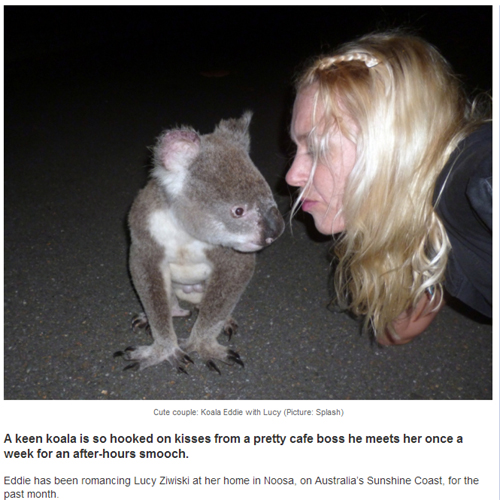 Stop! Before you read on for our fabulous five, do you have one you want to add? Let us know on Facebook,Twitter, Linkedin or Google +

I’ve heard of the myth that you can kiss frogs to try and find your prince but I’ve never heard about kissing a Koala. This Australian woman, Lucy Ziwiski, has been romanced by Eddie the Koala who has been meeting her for kisses every week when he turns up outside her work for a peck. On the plus side she says his breathe smells like eucalyptus so if he’s not going to turn into her Prince Charming, then at least he smells nice while they are smooching.
http://metro.co.uk/2013/04/03/kissing-koala-is-a-breath-of-fresh-air-for-smitten-cafe-boss-3581389/

WHAT NOT TO WEAR (Laura)

Being a bit of a clothes whore, choosing what to wear for work every morning can be a bit of a task, which is why this guest blog on CIPR Scotland from Mike Ritchie from Mike Ritchie Media caught my attention as he muses on the difficult decisions PRs face when it comes to choosing the perfect work look. It seems that men worry just as much as us women – do they go for a full three piece suit or keep it casual with an open neck shirt and smart trousers. Here at Holyrood PR we are not sticklers for formal attire but we are all required to look smart and well presented, so that might be a nice blouse and skirt, a wee dress or a tailored pair of trews. In my opinion you should wear something you feel comfortable in and something which reflects your own personal style and who you are as a person. There’s no point in sticking someone in a suit when they aren’t comfortable as it may just stifle their creativity and productivity. What am I wearing today? – a smart grey skater dress, studded belt, shoe boots (with heel) and my usual black snood.
http://ciprscotland.wordpress.com/2013/04/02/guest-post-does-it-matter-what-a-pr-professional-wears/

We’re always taking the mick out of the poor ole Met Office here in the UK, but most of the time it’s justified – they just never seem to predict the weather right do they? The MetService in New Zealand has taken these matters into their own hands and concocted a clever, unique and I imagine very cost effective way to promote their services. Their billboard ad has been created to resemble a web page and as the ‘main screen’ is transparent, onlookers are actually seeing live weather framed by the billboard. Clever Kiwi’s. It just goes to show sometimes the simplest campaigns are the easiest and most effective. A great idea although it does beg the question: why would you need a real-time weather update from a website, when you could just look outside?
http://www.thedrum.com/stuff/2013/03/29/new-zealand-weather-service-billboard-ad-shows-it-has-live-weather-updates

SMASHED UP PHONE THE BEST OF ALL TIME? (Aimee)

British satire site, The Daily Mash, has hit out with another cracker – declaring that a screen smashed Nokia is the best phone of all time. Jokes aside, I’d have to agree and check out all the bozos going about with unrepaired iPhone screens? They’re trying to get in on the game but they won’t succeed, you can’t mix the two. I’d definitely describe the Nokia bad boy as “the best phone and really you want one with the screen a bit smashed up, because that gives it character.” My hardcore Samsung doesn’t have a back and is plastered up with celotape – it’s been through the wars, I reckon the injury smothers the phone in intrigue. Others might look on and think, “wow, what happened to that guy. He must have been in deep. Respect.”The shiney shine, is overrated. You heard it here first, go mess up your phone.
http://www.thedailymash.co.uk/news/science-technology/nokia-with-broken-screen-is-best-phone-of-all-time-2013040464681

Airbrushing, plastic surgery, botox and implants – it’s no wonder the rich and famous look so fantastic all the time. Not to mention the entourage made up of make-up artists, hairdressers, stylists nutritionists and trainers that follow the stars wherever they may go. Photoshop can be a celebrities best friend and their worst nightmare. Danny Evans a New York based artist, frustrated about how over-retouched all the celebrity pictures are decided to retouch the celebs by stripping away their glamour. Guess what…the results are hilarious they look like ordinary people you wouldn’t look twice at in the street.
http://www.demilked.com/celebrities-make-under-danny-evans/