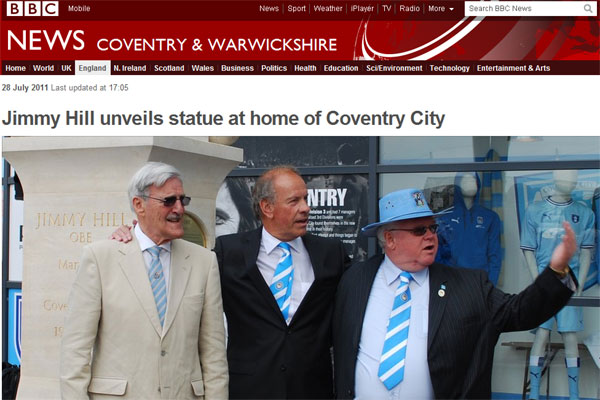 He’s one of the most divisive figures in football history, responsible for a thousand playground taunts and the butt of numerous offensive chants on the terraces. But if there’s one place where Jimmy Hill is still revered, it’s at the Sky Blue haven of my beloved Coventry City FC – the team he managed to relative glory back in the 1960s.

Although I’ll confess that there’s many a time I’ve stroked my imaginary elongated chin and uttered the immortal words “chinny reckon” or “chinny chin” in response to a classmate’s spurious lies, I’ve nothing but respect for the man (and the chin) that was the basis for such impersonations. After all, Jimmy Hill took the reins of my stuttering football club and somehow transformed them into a top flight team – meaning that when I started supporting them, I was able to watch teams like Manchester United and Liverpool coming to Highfield Road rather than Torquay or Hereford.

This high regard among supporters and the club’s hierarchy has now led to Hill being immortalised in his very own statue, which was unveiled outside Coventry’s new stadium the Ricoh Arena this week. Paid for entirely by donations, the 7ft tall £150,000 likeness will tower above spectators visiting the ground in the new season and will supposedly inspire the team to actually achieve something other than a miserable mid-table finish for the tenth year running.

Jimmy’s own verdict? Apparently he thought the statue’s chin was too small. Top man.

He purchased his custom-made £200 blue and black lycra costume from a firm in America.

With his self professed special power being a “desire to make the world a better place” he targets pub rows and street fights between 9pm and 2am.

Check out his crime busting moves at the link below.

Love this story about a huge digging machine which has been excavating tunnels under New York – and will now have its final resting place 14 storeys beneath the streets of Manhattan. What will future archaeologist make of it, I wonder?

DOG FAKES ITS OWN DEATH (Pamela)

Move over John Darwin, there’s a new death faker in town.  Unlike the infamous “canoe-man”, this hyperactive pup really knows how to fake his own death in style.  During a game with his mate, the clever spaniel decides to pull a fast one and cause unnecessary concern by immediately falling over after being nudged on the neck.

With more than 100,000 hits on YouTube, this clever spaniel is set for greater things.  Check him out….

Did you know that it is still illegal in England to catch a taxi if you have the plague? Or that in Scotland it’s a criminal offence to be in possession of a cow whilst drunk? Nope neither did we and these aren’t the only crazy laws which still exist in the UK and Europe today. Check out this top ten list for some of the best laws which fail to have been changed with our modern society.