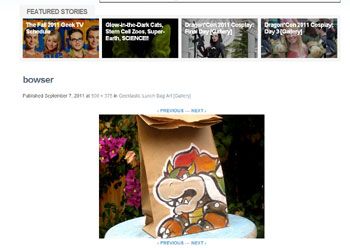 TO BOLDLY GO WHERE NO LUNCH BAG HAS GONE BEFORE (Adrian)

Top marks to this devoted dad in the U.S.A. While other school pupils have to carry around a boring, bland paper bag for their packed lunch, he’s ensured that his kids will be the talk of the class with these hand-crafted, geek-tastic containers.
Clearly a budding artist of some talent, he apparently spends his own lunch breaks coming up with new sci-fi and fantasy artwork to put on his kids lunch bags – so that they have a new surprise every day. I particularly like the epic Star Wars/Monty Python mash up with Darth Vader encountering the insult-throwing French castle guards. Brilliant.
http://www.geeksaresexy.net/2011/09/08/geektastic-lunch-bag-art-gallery/

MY HOUSE IS A DUMP (Scott)

The houseproud among us will often be heard proclaiming: “This place is a dump!” whenever the scatter cushions are awry, the bath towels hanging at inequal lengths and the food tins stowed in the cupboard without the labels facing forward (or is that just me?).
However, one man has taken things to elaborate lengths, by creating a ‘dream home’ (complete with granite worktops, wooden flooring and high quality appliances) in a tiny dumpster. Quality
http://laughingsquid.com/artist-converts-trash-dumpster-into-one-room-home/

HOW TOP WRITERS HIT THE HUT FOR INSPIRATION (Adrian)

Following the news that Roald Dahl’s writing shed is at the centre of a proposed £500,000 restoration scheme, I wondered how many other authors had taken inspiration inside the barren walls of a solitary hut.
It turns out that the Independent newspaper was also wondering the same thing, and has published a list of the most famous writing huts from history. It’s amazing how such luminaries as Mark Twain, Dylan Thomas and Philip Pullman have all sweated out their stories with little more than a bare shed surrounding them. Clearly inspiration comes from the most bland of surroundings.
http://www.independent.co.uk/arts-entertainment/books/features/famous-writing-sheds-2354661.html

Most hate that plane journey back from a fantastic holiday and can already feel the onset of the holiday blues creeping in.  But those on a Thomson Airways flight back from Majorca had a lot more to contend with as a passenger attempted to thrust open the doors whilst at 36,000ft.  He tried to assure those trying to stop him by shouting out: “It’s OK, we are just on a simulator.”
Cabin crew and passengers managed to restrain the man and tied him up with seatbelts before the plane made an emergency stop at Gatwick airport to have him removed by the police.  Traumatised passengers were reassured that the doors would not have opened due to the pressure within the cabin.
Sussex Police have confirmed that a 22-year old man from Ashington in Northumberland was arrested at Gatwick Airport yesterday on suspicion of endangering the safety of an aircraft.
http://www.metro.co.uk/news/875586-thomson-airways-terror-as-passenger-attempts-to-exit-plane-at-36-000ft

As a bit of a shoe fan I have amassed a nice wee collection over the years and I would say that thankfully mine have remained relatively odour free, however this clever ad campaign by Condor Sneaker Cleaner certainly gets you thinking.  Incorporating some impressive art with some cleverly placed trainers and the message “if your sneakers could speak, your foot would faint” this ad might get you running home for your shoe boxes to do the ultimate cover up job.
http://www.ibelieveinadv.com/2011/09/condor-sneaker-cleaner-faint-bad-spell/