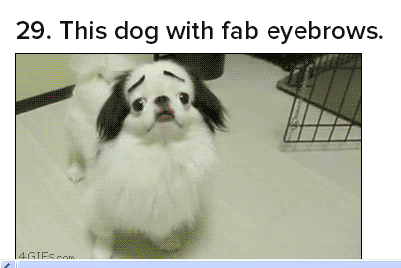 Today’s must see high five is a compilation of the cutest, most hilarious dog GIFs of all time.  The stellar line-up includes a dog with some epic eyebrows, a dancing poodle and a unicorn pug.
We spent a good half an hour yesterday in stitches at these crazy critters.
You’re welcome.
http://www.buzzfeed.com/mattbellassai/the-40-greatest-dog-gifs-of-2012-6z51

If you have ever wanted to explore Mount Everest but don’t fancy the climbing part, then check out this incredible mosaic of images created by an intrepid photographer.
Mountaineer, photographer and filmmaker David Breashears founded GlacierWorks in 2007 to illustrate the effect of climate change on the glaciers around Mount Everest and has spent years undertaking photography expeditions to the region.
477 individual images make up the billion pixel image of the Khumnu glacier which were then stitched together to create one massive image.
Truly amazing!
http://www.glacierworks.org/

The debate over how those who post offence, aggressive or intolerant messages on social media sites should be dealt with, has been quietly raging for a while. There seems not a day goes by without celebrities drunkenly slandering their acquaintances or spouses and featuring on the pages of the Daily Mail online, but it is those out of the public eye who target famous personalities or who offend people’s beliefs who are targeted by law enforcement. For examples of these instances see news relating to British diver Tom Daley who had insulting messages sent to him about the death of his father or news on the man who posted the picture of a burning poppy on Remembrance day. However, under new guidelines set out by Director of Public Prosecutions, Keir Starmer QC, those who post offensive messages on Twitter or Facebook are less likely to face criminal charges. Although the definition of offensive remains to be solidified. For more see the link below.
http://www.huffingtonpost.co.uk/2012/12/19/twitter-facebook-prosecution-cps_n_2327330.html​

If you’re a fan of Psy and Carly Rae Jepson then this video is for you. YouTube has made its own video paying tribute to the past year’s most popular videos as well making reference to some of the biggest things to happen in 2012 including the Olympics, Obama’s re-election and the Redbull space jump. I personally think our latest HPR TV can rival this video, see what you think!
http://www.brandingmagazine.com/2012/12/19/youtube-rewind-2012/
http://bit.ly/T9gSBZ

Animal lovers are out in a fury before Christmas, hoping a young pup is going to jump out a basket under the tree.
But, I think I may have just found a cracking alternative – the capybara which looks like a gigantic hamster.
I’d probably forget I had one of these South American native beasts roaming the gaff and think I was under a lucid acid trip before I remembered it was mine and a normal sized creature according to its breed.
This amazing creature even has its own web page which pays tribute to its resemblance to a favourite household pet.
http://gianthamster.com/
Check one of these fellas out on its owners lap eating what looks like a pack of butter.
http://www.youtube.com/watch?v=1w-zvJNuPgE

Shake it off: Time to consign handshakes to the history books

Comments Off on Shake it off: Time to consign handshakes to the history books

Shake it off: Time to consign handshakes to the history books

Comments Off on Shake it off: Time to consign handshakes to the history books