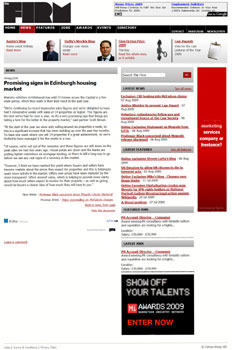 Edinburgh’s leading property solicitor Warners has been celebrating another prestigious piece of press coverage in one of the country’s top legal magazines.

The Firm ran a story about Warners had recorded its best sales figures in a year, which were revealed after the company recorded a weekly average of 14 property sales over a 5-week period.

The figures suggest that Warners is bucking the downward property trend that has affected the market over the past two years. Estate agency partner Scott Brown said that although the figures were still down on their peak values from 2007, they still showed that there were positive signs ahead for the Capital’s property market.

The full coverage appeared in The Firm magazine and was the result of a Scottish PR campaign for Warners implemented by Edinburgh public relations agency the Holyrood PR.