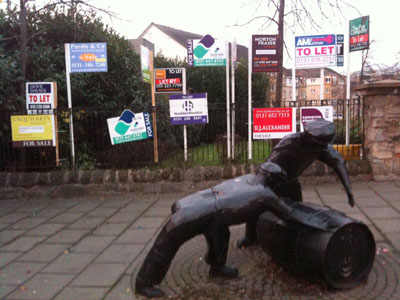 Citylets’ latest quarterly report has shown that Fife is one of the most affordable places in the UK for renting a property.

Dan Cookson, Senior Analyst at Citylets, said: “Of all of our newly introduced areas Fife was one of the most affordable areas to rent with West Lothian coming in as the least affordable. The addition of these areas have made for quite interesting reading.

Citylets is currently the UKs No1 residential lettings site according to online competitive intelligence agency.  Their quarterly reports are the only detailed and independent barometer of the rental market, based on more than 70,000 annual lettings from more than 400 agents.

It is now a respected tool among investors, landlords and letting agencies, covering larger areas in Scotland such as Edinburgh, Glasgow, Aberdeen and Dundee and now, for the first time, is extending to cover information from smaller local authority areas including Fife.

The next Citylets quarterly data report, showing the rental figures for Scotland during the fourth quarter of 2012, will be published in January.

This coverage was secured on Kirkcaldy Today Online as part of a targeted PR campaign carried out by public relation experts Holyrood PR on behalf of Citylets.