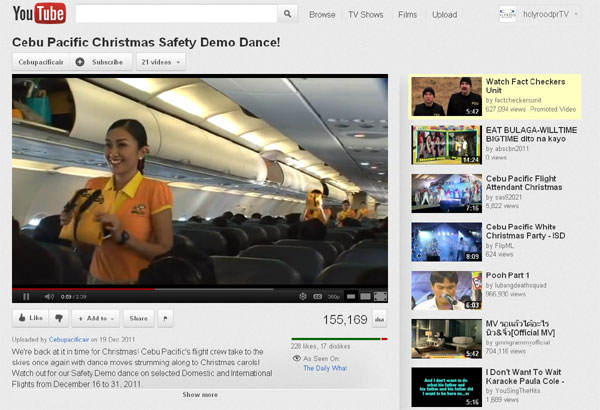 There’s a wee town in Germany that is a well-known and popular spot for holiday-makers looking to have a bit of a giggle. It’s certainly a place I’ve always wanted to visit, if for no other reason than to get a picture of the non-descript road sign welcoming you to the town – which is emblazoned with just one word: F***ing. For years, the residents and local leaders of F***ing have been, unsurprisingly, rather cheesed off with tonnes of English-speaking tourists flocking to gawp and snigger at the name of their town. But after years of frustration, it appears they’ve resigned themselves to the exposure and are just going with the flow. This year, they’re sending out Merry F***ing Christmas cards and townspeople have started to cash in with a range of F***ing beers and souvenirs.

The best part though, is that they only decided to keep the town name and exploit it after taking advice from a nearby village which had the same problem. The name of that village? Wank. Brilliant.
http://www.iol.co.za/news/back-page/town-wishes-all-a-merry-f-ing-christmas-1.1202273

NOT SO MUCH OF A DONKEY THEN? (Laura)

I mentioned this song a couple of weeks back and now it seems that the 1960’s novelty song Dominic the Italian Christmas donkey has entered the iTunes chart after a campaign by Chris Moyles. The DJ who plays the song every year on his show told listeners he was going to purchase the track in order to get it into the official Christmas chart – which resulted in other closet fans around the country doing the same. Since the show many version of the song have appeared in the high end of the iTunes, even at one point appearing as high as number 2! As a song itself it’s not the best, but if it means it has the possibility of knocking an x factor act off the top then well maybe I’ll head out and buy it!
http://www.digitalspy.co.uk/music/news/a356751/chris-moyles-gets-donkey-song-to-enter-itunes-top-ten.html

Buzz Feed has compiled a list of the funniest headlines of this 2011, and some of them are utterly unbelievable.My vote for the most ridiculous is definitely, “Gordon Ramsay Sex Dwarf Eaten By Badger”. This really made me chuckle. Was sad to see that “Baby seals crawls out of sea, up road, and through cat flap then makes itself at home on sofa” was not featured – (A genuine headline on skynews last week)
http://www.buzzfeed.com/mjs538/the-50-funniest-headlines-of-2011

WE’RE NOT WALKING IN THE AIR (Laura)

I don’t know about you but one of my Christmas traditions is sitting down and watching The Snowman film based on the story by Raymond Briggs, so when I heard that they were remaking the film without the classic Walking In The Air theme tune – I was more than a little bit disappointed! The re make will see the young boy and his snowman pal fly across modern cities of London and Birmingham and instead of heading to a snowman’s party they will instead go to a ski resort. Raymond Briggs had apparently resisted a remake for years and although he has given his approval he is keeping his distance from the film. I understand that the film may be a little dated but that’s part of the magic and with the new version I would be worried that the magic would be lost!
http://www.dailymail.co.uk/news/article-2077806/Classic-Christmas-cartoon-The-Snowman-updated–director-scrapping-Walking-Air-theme-tune.html

ALL I WANT FOR CHRISTMAS (Gaynor)

Ahhh it’s nearly here and everyone is getting into the Christmas spirit! Especially so are these Filipino air hostesses who kindly put on a wee show for their passengers during their routine safety address. Travellers aboard Cebu Pacific were given a dancing rendition of Mariah Carey’s Christmas smash hit All I want for Christmas is you. It’s not just the Christmas season the trolley dolly’s like to make the safety message stand out, they believe entertainment with the safety demos help customers concentrate and take note of the safety precautions. Next year they are scheduled to do a rendition of Lady Gagas Just Dance.
http://www.dailymail.co.uk/news/article-2077649/Filipina-air-hostesses-perform-safety-demo-festive-Mariah-Carey-tune.html