on behalf of Scribbler Cards 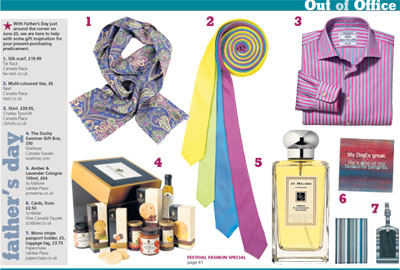 The Wharf has detailed a Father’s Day card from Scribbler in a feature dedicated to buying gifts for dads.

Trinity Mirror is one of the UK’s largest newspaper publishers with an award winning portfolio including five national newspapers, over 150 regional newspapers and more than 500 digital products.

In their feature titled “Out of Office: Father’s Day” the double page spread features a number of gifts suitable for dads on Father’s Day – including a card from Scribbler.

The featured card is by Urban Graphic and states “My dad’s great, he’s one of my favourite parents”.

With 18 stores nationwide, Scribbler has become the UK’s favourite card shop with a huge selection of gifts as well as cards and notebooks online. Their irreverant greetings have proven popular with customers across Scotland and England and has become the first choice for cards for any occassion.

The piece can be found in The Wharf newspaper and was secured as part of an ongoing and successful pr and social media campaign carried out by the Holyrood PR.