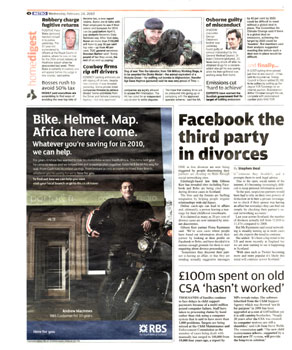 The Edinburgh-based firm has been featured in an article run by one of the biggest free publications in the country – The Metro.

Under the headline “Facebook the third party in divorces” the story details research carried out by Gibson Kerr on the impact of social networking sites on couples getting divorced.

As specialists in divorce and family law, the firm recently revealed that research has shown that almost one in five divorce cases in England are being influenced by social networking sites such as facebook and bebo.

And they added that the trend is starting to surface in to Scotland as more people are finding details about their partners through the sites.

The full article appeared in The Metro newspaper and was the result of a sustained public relations in Scotland strategy maintained by Holyrood PR.