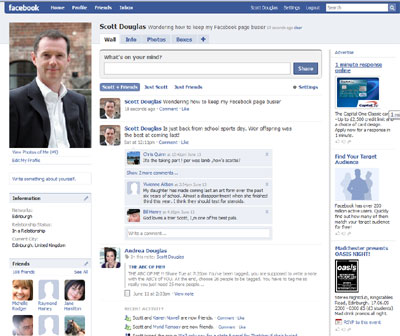 As the world + dog knows, Saturday morning saw Facebook start to give away what was dubbed ‘vanity URL’s’ where you could go and have, for example www.facebook.com/craig.mcgill instead of www.facebook.com/24601 and enough people seem to have been keen for it – though God knows why it wasn’t offered as standard from the start (let’s call it an internet mystery just like why Twitter doesn’t have a decent address book function).

As Techcrunch reports within seven minutes of the service being available, 345,000 users grabbed one. Within 15 minutes, over a half million had – I just hope no one in the UK got out of bed early doors just to grab a URL.

But not everyone went for the obvious naming conventions – some decided to tie into SEO, while some decided to have fun with it – and it’s going to be interesting to see how it all plays out. It was during a conversation with that rather well-known President of New Marketing Labs, Chris Brogan that I started to see how people might go for this. Chris had declared that he wasn’t going for his name and was instead going to think it through and pick something that tied into his activities, which will work well for Chris, but I hope Ron Jeremy hasn’t tried the same thing. The incredibly talented Ross McCulloch from Third Sector Labs also wondered about what was the best name before settling for his own and then he’ll grab something else for the Fans pages.

The most creative use of the new naming convention seems to have been credited to Christine Shipley of San Francisco. Rather than go for facebook.com/christine.shipley or even facebook.com/shipley, she went with facebook.com/default.aspx. Mashable has a list of others – especially in the comments section – that they think are funny. YMMV as they say.

And never one to miss an opportunity, Holyrood PR’s very own Scott Douglas is now known as PRScotland and it’ll be interesting to see how well that works in generating business, better SEO and so on. The next step of course is for the Holyrood PR Fans page to get a new monicker all of its own (yes, I’m sure you’re all following aren’t you?). Feel free to leave suggestions in the comments box.

I have to say I’m just disappointed that, given what happened in Iran after the elections at the weekend, no one went for www.facebook.com/iran and linked it to a site called BLOCKED or used it to highlight the digital censorship or ways to get round it (see end of post for that).

I ended up going with the utterly pedestrian craigmcgill (and craig.mcgill) because when I do use Facebook (confession time: it’s not my favourite social media platform. I understand it, I can whip up a bunch of PR activities and CRM ideas around it, but don’t expect me to spend hours on it for unwinding) it’s more for personal stuff and not my work in Scotland in Social Media or as an author.

Though some web2.0 celebs can’t even get their names…Silicon Valley blogger Louis Gray is having some bother. As Louis writes:

Visible social networking folks, including myself, Jesse Stay and TechCrunch’s Michael Arrington were among those remaining somewhat befuddled at our situation – unclear if we were singled out for user name reservations by a well-meaning Facebook employee (who will tell us eventually?), or if instead, we’re just in line to be completely out of luck.

(As an aside, while Facebook may have kept those names for Louis, Jesse and others, you would think they would have told them first. Also, to not reply once this has gone up online is a bit of a #prfail if you ask me.)

It’ll be interesting to see how this plays out. If you registered a vanity URL, let us know what you went for…