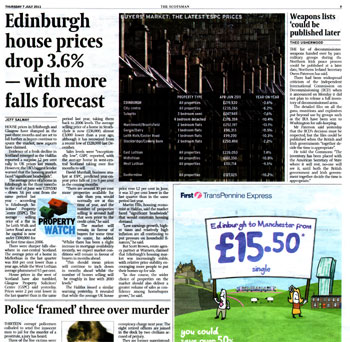 Edinburgh’s leading solicitor estate agent has received a prominent piece of PR after being featured in the Scotsman’s news pages.

Warners was quoted in the national newspaper as part of a story focussing on the ongoing issue of house prices across the country – which was prompted by the latest figures release by the ESPC.

The stats suggested that house prices had taken a slight tumble across Edinburgh in recent months, and that conditions were proving challenging for buyers and sellers in the city. However, Warners estate agency partner Scott Brown told the paper that the market was remaining stable, and that innovative marketing was helping ensure that people could move home in the city.

The full article, which was the result of an ongoing PR in Scotland campaign by the Holyrood PR, can be viewed on the Scotsman website.