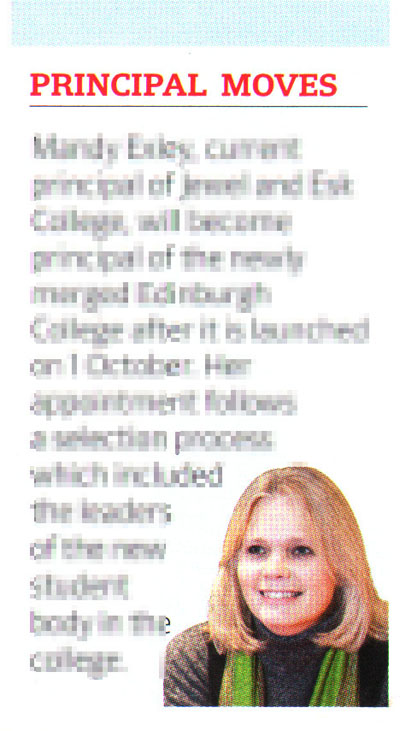 An exciting announcement for the new Edinburgh College was made this week after months of months of speculation.

The principal for the newly formed college was announced with Mandy Exley, former principal of Jewel & Esk College, taking up the appointment on the 1st of October when the college launches.

Her appointment provides the final key link in the process that will allow the creation of a bigger, stronger and better college serving Edinburgh and the Lothians.

Mandy said: “The creation of Edinburgh College is about a journey from good to great.  The three existing colleges are really good in their own right but together, they can deliver great results.

“The College aims to deliver the very best education and training to students.

“By achieving that, we have an opportunity to build an economic powerhouse – to play a vital role in getting individuals back to work and to deliver skilled people needed in those economic sectors where Scotland can enjoy a genuine competitive advantage.

This coverage was secured with TESS as part of a sustained PR campaign carried out by Holyrood PR on behalf of Edinburgh College.