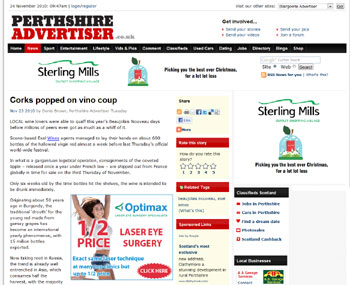 A leading wine distributor has celebrated more high profile PR in Scotland with coverage in a local Perthshire newspaper.

Excel Wines was featured in the Perthshire Advertiser after securing a consignment of 600 bottles of Beaujolais Nouveau days in advance of its official release date.

The Perth-based firm stole a march on its competition by securing a massive consignment of the wine before the official Beaujolais Day in November – which sees countless traders across the world race against each other to get the first bottles of the famous red to market. The wine is only released for sale once a year under French law, as it is thought that the wine must be consumed by Christmas time.

The coverage can be viewed on the Perthshire Advertiser website and was secured thanks to the expertise of Holyrood PR PR in Scotland.