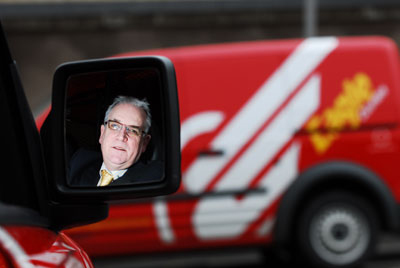 The company, with offices in Edinburgh, Glasgow and Bathgate, has been so successful recently with new business including £3 million contracts with communications giant BT and NHS Scotland that is looking for more red vans to add to the fleet – but there’s a shortage across the continent.

And while the Government is offering £2000 for those who trade in old cars, Eagle Couriers’ director Jerry Stewart is joking that there should be an incentive for people to trade in red vans.

Jerry, said: “It’s been an incredible 12 months for us between new business, buying up competitors like QED and natural wear and tear on vehicles, so we went to get replacement vans.

“However when we went to van suppliers they told us that there’s a shortage of red vans – they aren’t being made due to the credit crunch. Coloured vans just aren’t being made in the traditional numbers. We can’t get our hands on them at all.

“It’s incredible. Here we are, a Scottish success story, business improving thanks to our growing reputation for quick delivery across the UK and we’re stumped for red vans.

“If we can’t source red vans soon – or if we don’t hear of red vans being available – then we may have to look at changing the fleet over to another colour.

“Apparently there’s something like 23,000 white vans lying unsold in Europe, so that may be the way forward, but it would be a shame to lose our distinctive livery as it’s built up a lot of goodwill over the 30 years we’ve been in business.

“One thing is certain though: our customers don’t have to worry – we aren’t short of vans, so all deliveries will be made on time as always – we’d just like to have some more.”
If the firm do move over to white, they’ll be moving over to a safer colour of vehicle, according to motoring body the RAC Foundation.

White has been shown in tests to be the safest colour for driving in.

RAC Foundation spokesman Philip Gomm said: “Daimler Benz did a study a few years ago, which showed white was the safest colour for a vehicle in most lighting conditions.

“Another study, carried out in 1995 showed that on mainland Europe, white fire engines tended to be in less accidents than red fire engines. In America, another report stated that white allowed for very high visibility across a variety of driving conditions.”

Phil joked: “Perhaps they should ask for a reduction in their insurance premiums. Seriously though, it may well be that this move results in less accidents and bumps for the fleet.”

Notes to editors:
Eagle Couriers is Scotland’s leading independent courier company, employing 100 staff between its bases in Glasgow, Bathgate and Edinburgh.
The company provides excellent customer service and competitive prices, as well as offering same day/next day deliveries to local, national and international destinations.
Eagle Couriers has a 3500-strong client base ranging from blue chip firms such as the BBC and BT, public organisations including the NHS, and sole traders. As business-to-business experts, Eagle Couriers helps other firms operate more efficiently and profitably, by safely delivering on time everything from documents, medical samples and engine parts to sports footage, scripts and TV props.
The company invests in new technology like web booking and vehicle tracking to benefit clients and operates in an ethical fashion. It is registered with relevant professional bodies and enjoys Investors in People status.