on behalf of NKD Clothing 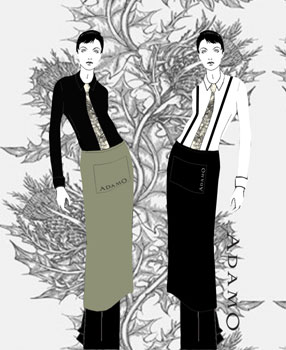 NKD Clothing founder Gill – who successfully spearheaded a management buyout of the corporate clothing firm in 2005, since doubling the company’s profits to £1.3 million – beat six finalists to emerge triumphant in the Scottish final of the JCI Creative Young Entrepreneur Award (JCI CYEA).

As a result of her triumph, Gill will now be entered into the International final of the competition, which takes place later this year in Tunisia.

Gill said: “NKD Clothing is Scotland’s leading supplier of uniforms and we offer a unique service in terms of quality, style and brand identity. I’m absolutely delighted that the business has been recognised in such a wonderful way by winning the JCI Creative Young Entrepreneur Award.

“For NKD Clothing to be even nominated for an award of this magnitude is very pleasing, and to win it is a phenomenal achievement. I am extremely proud of my team, and being recognised for our ability as a company has confirmed NKD Clothing’s capability to go from strength to strength in the corporate clothing sector.”

The Scottish award has previously been won by multi-millionaire bra mogul Michelle Mone, who entered the competition in 2006 and was selected to compete in the International final alongside 19-year-old “Super Jam” business whizz Fraser Doherty, after both were successful in the Scottish National final.

Gill added: “To follow in the footsteps of successful entrepreneurs such as Michelle Mone and Fraser Doherty is a huge honour.

“Despite the recession, NKD Clothing has continued to win a string of orders to provide stylish and bespoke uniforms to venues across the UK.

“To emerge victorious over five other successful Scottish businesses backs my belief that now is the right time for NKD Clothing to embark on a global sales push, increasing the reach of stylish corporate clothing to countries out with the UK.

“It’s a fantastic achievement to progress to the international final and a real honour for NKD Clothing to be recognised in this way.”

Julie Diver, National President of Scotland for the Junior Chamber International (JCI), said: “Scotland is a hive of creativity and this has been borne out by the sheer variety of applications we’ve had for these awards.

“Our winner Gill, is to be commended in particular for her vision, strong ethics and leadership in a now established business. By contrast, Isla’s business is still in its infancy, yet she has the hallmarks of a great entrepreneur with determination and creativity. Our congratulations must go to all six shortlisted nominees who made the judges job very difficult.”

It has won plaudits for transforming the appearance of staff with a host of blue chip companies, including the De Vere and Malmaison hotel groups.

The JCI CYEA was launched in 2005 and was designed specifically to recognise outstanding entrepreneurs between the ages of 18 and 40. Applicants are required to have started a new business using creativity in product development, service development, and in their approach to the market.

Existing business owners must have taken an active business and incorporated creativity to solve a problem, change a process or to create positive change in their business operations.