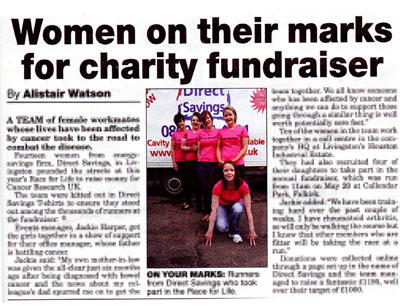 The energy-savings firm, Direct Savings, in Livingston sponsored fourteen of its female employees to run in this year’s Race for Life on 20 May at Callendar Park, Falkirk in support for their office manager, whose father is battling cancer.

Each of the women have been personally affected by cancer in the past, and looked forward to the opportunity to show their support.

Events Manager Jackie Harper said: “My own mother-in-law was given the all clear just six months ago after being diagnosed with bowel cancer and the news about my colleague’s dad spurred me on to get the team together.

“We all know someone who has been affected by cancer and anything we can do to support those going through a similar thing is well worth potentially sore feet.”

Direct Savings was set up in April 2010 to provide loft insulation under the government’s subsidised energy efficiency scheme.

The company which employs over 130 staff and has a turnover of £12 million a year now has four branches across the UK in Livingston, Peterhead, Milton Keynes and Bradford.

This coverage can be viewed in full on the West Lothian Courier website and was achieved as part of the ongoing PR campaign by the Holyrood PR on behalf of Direct Savings.