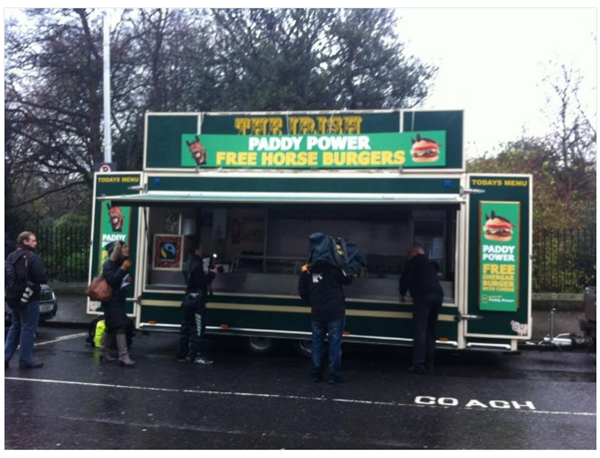 Would you try a burger made of cheval? Do you have a Skype loving pooch? Let us know on our Facebook or Twitter pages!

WHO FANCIES A SHERGAR BURGER? (Aoibhínn)

Paddy Power responded to the news that horse meat has been found in Tesco burgers by setting up a van in Dublin to give out real equine burgers. The Irish betting company lived up to their cheeky reputation by setting up a Paddy Power a Free Horse Burger van in Dublin’s Merrion Square yesterday. They also created a special bet: What will be next to contaminate beef burgers? The bet begins with deer at odds off with deer at two to one, with options for zebra, lion and Bigfoot mentioned all the way up to unicorns at 2000 to one. Place your bets now folks.
http://www.thedrum.com/news/2013/01/16/paddy-power-unveils-new-bet-next-contaminate-beef-burgers-squirrel-zebras-and​

If the sight of your Facebook friends posting sickening statuses and loved up photos with their partners is making you feel lonely or you want to get revenge on an ex, then there may be help for you.
A Brazilian firm will create an authentic looking Facebook profile of a fake girlfriend/boyfriend for you to connect with, complete with lovey dovey statuses to fool all.
Namorafake.com will solve all of your dating woes, and right in time for Valentine’s Day – all for just $39.99.
http://mashable.com/2013/01/16/fake-facebook-girlfriend/

I am quite a fan of dub step. I wouldn’t say I’m an avid fan, but I like the bass and I listen to it on occasion. I also love animals. So, this morning’s high five inspiration could not be more perfect. Harvey the cockatiel has been captured on video, tweeting out some seemingly Skrillex inspired beats, perched on the finger of his owner. In less than a week over 5.4 million other people have watched the 45 second clip, so click on the link below to become one of them.

GIVE THE DOG A PHONE (Victoria)

Dogs have friends too, and if they live on the other side of the world then Skype is at hand to help them keep in touch.
An adorable video of a wire haired fox terrier from Washington State called Gator having a Skype session with a doggy pal in the UK has gone viral.
It’s amazing to watch them interact and recognise each other’s howls – I would love to know what they are saying in doggy language.
http://www.youtube.com/watch?feature=player_embedded&v=4RQYr9HeVxw

Filming yourself doing a cover of ‘Seven Nation Army’ in a car while your dad accompanies you on the piano accordion and your mum drives the family Volkswagen around town, is probably not on your top 100 list of things to do is it? Well German YouTuber, Flula Borg has done just that, this video is so hilariously odd, I just had to share. Enjoy!
http://www.huffingtonpost.co.uk/2013/01/16/dj-flula-autotunes-seven-nation-army-cover_n_2485758.html?utm_hp_ref=uk-comedy​