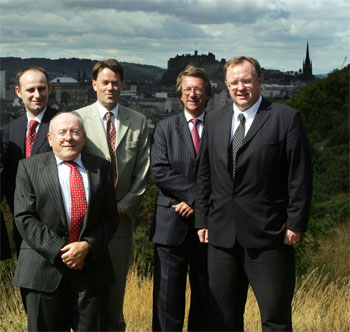 House hunters should be looking to secure a new home at a bargain price before house values start to rise and encourage other would-be buyers back into the property market.

The ELPG group of leading property solicitors says that, as the property market will be the first area to recover from the effects of the recession, house buyers have a limited time to purchase a home at a knock down value and face less competition for properties.

The group, which consists of Warners, Neilsons, Drummond Miller, Leslie Deans & Co and the Lints Partnership, highlights that the property market has historically been the first area to recover during previous recessions in the UK.

It adds that a recent surge in enquiries and property sales in Edinburgh is suggesting that the city’s property market is nearing the end of its slump – making it the perfect time for buyers to look to purchase a new home, or risk missing the end of the downward curve.

Steve Spence, senior partner at ELPG member firm Neilsons, said: “The property market in Scotland was the first thing to be hit by the recession and over the past 12 months, we have seen the number of property sales decreasing, as well as house prices falling.

“However, history suggests that property is also the first sector to recover following an economic downturn. During the last global slump in the 1990s, the property market was hit badly by the recession but it was also the first area that saw signs of recovery.

Increase in property sales and enquiries

“We’re already seeing the return of closing dates in Scotland’s property market and there appears to be more confidence among buyers and sellers. We have had an unprecedented number of enquiries and sales among the ELPG member firms over the past two weeks, so it’s clear that there is a lot of demand for bricks and mortar in Edinburgh.”

Steve adds that there have been many people who have previously been put off purchasing a property due to the economic slump, but he believes that they only have a limited amount of time to take advantage of the current favourable buying conditions – as house prices are nearing the end of their downward curve.

He said: “In the last two months, the Lloyds TSB and Nationwide reports have shown very slight increases in Scottish property house sale prices and, while these figures may be skewed by lower volumes of sales in the market, it is a clear sign that the downward trend is nearing an end – and we may be entering a plateau period before an imminent rise.”

“There have been a lot of people waiting until house prices bottom out before making a purchase. We’re nearing the point now where it will become clear that the bottom of the curve has been reached and these buyers will start piling back into the market.

“Of course, when this happens there will be more competition for properties and this will eventually start to push prices back up. At the moment, many buyers find that they can put a lower offer in for a property and have it accepted – as there are fewer purchasers challenging for each home – but this scenario will not last forever.

“Interest rates are currently at an all-time low and good mortgage deals are still available on the high street if you have the funds in place for a deposit. The conditions have never been better for buyers, so there is no point in waiting to enter the market – as there will not be a better deal around the corner.

“We would advise anyone thinking about buying a home to do so now before it is too late. Otherwise you risk losing out on the chance to buy your dream home at a bargain price.”

The ELPG – which is made up of Warners, Neilsons, Drummond Miller, Leslie Deans & Co and the Lints Partnership – was set up in 2002 with the aim of strengthening the members’ position as the main players in the Edinburgh and Lothians property scene. The firms currently account for more than a quarter of all sales in the ESPC and are supported by Holyrood PR PR in Edinburgh, which provides expert media support and public relations.