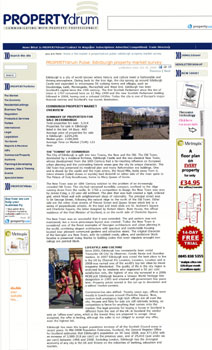 Memebers of the Edinburgh and Lothians Property Group have been celebrating another high profile piece of coverage in a leading property blog.

The ELPG was featured prominently in the influential Property Drum blog, which recently carries out an extensive overview of the Capital’s housing market.

The website focussed on key successes during for the group – which consists of Warners, Neilsons, Drummond Miller, Leslie Deans & Co and the Lints Partnership – including the success of its Spring Sales initiative. The blog also reported on strong sales figures at the ELPG firms during the year, which regularly recorded in double figures.

The full article appeared on Property Drum and was the result of a sustained Edinburgh public relations campaign by Holyrood PR PR in Scotland.