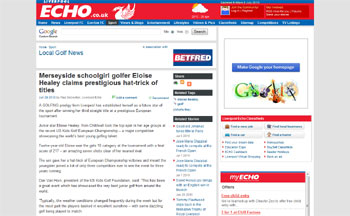 The U.S. Kids Golf European Championship has been featured prominently in a leading local evening newspaper.

Eloise triumphed in her age category at the three-day event in East Lothian, beating scores of players from around the world to the prize. Overall around 500 of the world’s best young golfers competed at the tournament, which is one of the highlights of the junior golf calendar.

The full article can be seen on the Liverpool Echo website and was the result of a sustained campaign by Holyrood PR PR in Scotland.

Georgina Continues to Thrive at 105

Comments Off on Georgina Continues to Thrive at 105