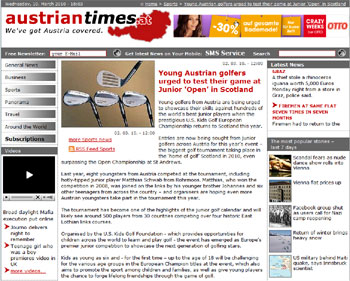 The U.S. Kids Golf European Championship has received a major piece of continental press coverage thanks to Holyrood PR PR in Scotland.

The competition, which is one of the world’s biggest junior golf tournaments, was featured on the influential Austrian Times website – a prestigious news service showcasing stories about Austria.

The website highlighted how Austrian youngsters, including former U.S. Kids Golf champion Matthias Schwab, were set to return to compete on the links in East Lothian this June. The youngsters will join hundreds of the world’s top young players for the three-day tournament, which takes place on some of the oldest courses in East Lothian.

The full article can be viewed on the Austrian Times website and was secured thanks to Scotland’s public relations experts Holyrood PR PR in Edinburgh.