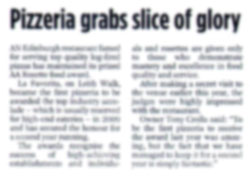 La Favorita proves it’s still a favourite gaining PR Scotland in the Edinburgh Evening News as it collects the AA Rosette for the second year running.

Tony Crolla’s award winning pizzeria was the first of its kind to recieve the AA Rosette last year and has managed to secure the accolade for the second year running.

In the article Tony expresses his delight: “To be the first pizzeria to recieve the award last year was amazing, but the fact that we have managed to keep it for a second year is simply fantastic.

AA award officials were highly impressed after a secret visit to the restaurant and the awards recognise the success of high achieving establishments that demonstrate mastery and excellence in food quality and service.

The article in Edinburgh Evening News was secured on behalf of La Favorita by Holyrood PR as part of a sustained media relations campaign.