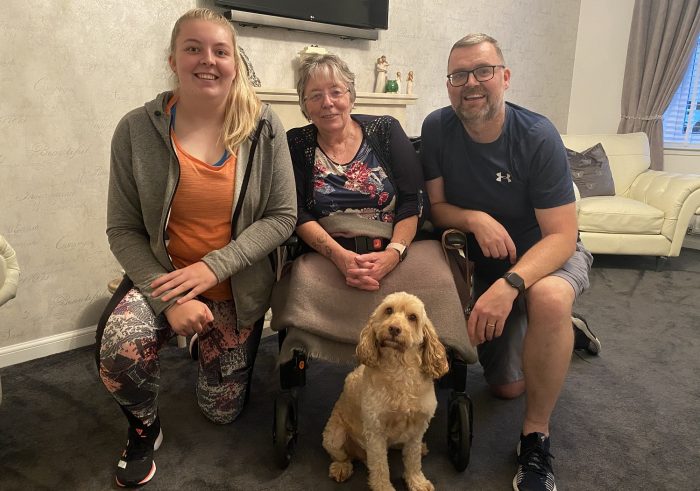 AN animal-loving duo from a renowned housebuilder ran 151km in support of Scottish Society for the Prevention of Cruelty to Animals (Scottish SPCA), raising £638 for the charity in the process.

The “Pound for Paws” campaign, with Olympian Laura Muir as ambassador, challenged participants to run a minimum of 30km in 30 days throughout August.

As well as spotlighting members of the CALA team that have adopted rescue animals, the housebuilder encouraged its own team members to spread the word about the campaign, building on its long-standing relationship with the charity.

Two of its team, Derek Hamilton, Commercial Director at CALA Homes (East), and Jacqueline Farr, Sales Consultant at Hazledene Lea, Maidenhill, Newton Mearns, went a step further and took on the challenge themselves, both smashing their 30km targets.

Derek Hamilton got involved with Pound for Paws with his daughter Sophie, and mother-in-law Betsy. He ran 100km in 30 days, while Betsy, who’s a double amputee, completed 52km in 30 days in her wheelchair. Sophie completed 42km over the month.

Derek said: “Betsy has been a double amputee for a year and a half. It’s completely turned her life upside down so Pound for Paws came up, we thought it might be a good challenge for her to do one km every day in her wheelchair.

“She’s really taken to it and it’s had an amazing impact on her – she’s even managed to raise £70 from her fellow residents in her sheltered housing.

“My daughter Sophie is at university, and found the challenge brilliant for giving her something to focus on every day. It’s been the same for me, getting out everyday for a run has been a great way to get out and clear the head after work.

“I’ve used it as a way to motivate myself, especially while working from home, while also raising money for a very deserving charity.”

Jacqueline Farr took on the challenge in memory of her cat, Louis, who passed away earlier this year, and her daughter’s dog, Arya. She ran 51km in August, raising £335 along the way.

Jacqueline said: “Arya is my daughter Jennifer’s dog – a gorgeous Dachshund with really special markings, which make her really valuable. Unfortunately, she was puppy farmed and bred, but she was too small to carry a litter so she was abandoned. Jennifer fostered her in 2016 and she became so attached to her Jennifer’s other dog, Loki, that she’s stayed in the family ever since.

“I’ve supported the Scottish SPCA for years but this year I wanted to do something more, so when Pound for Paws came up it seemed like the perfect opportunity.”

Both Derek and Jacqueline have continuously supported the Scottish SPCA over the years through donations and fundraising activities. Derek ran a half marathon in 2017, raising £2,500 for the charity.

Anna Devine, Director of Fundraising and Marketing at the Scottish SPCA, said: “The support from CALA’s team has been amazing, especially at a time where we’re facing such difficult challenges and moving all of our fundraising online.

“This fundraising enables us to continue carrying out our vital work rescuing and rehabilitating animals in need.

“This year, Pound for Paws exceeded our targets, raising a total of £36,000, and together the 362-strong group ran an incredible 15,000km over the month of August – a fantastic achievement for everyone involved. We’d like to thank Derek, Betsy, Sophie and Jacqueline for their incredible efforts and support.”

Headquartered in Dunfermline, Fife, Scottish SPCA is a 180-year-old national animal welfare charity which champions animal welfare and the prevention of cruelty to animals. The charity is wholly funded through donations and its work encompasses everything from community work and education to rescuing and rehoming animals across the country.

CALA Homes (East) has a longstanding relationship with the Scottish SPCA, having jointly promoted the redevelopment of the former National Wildlife Rescue Centre at Middlebank in Dunfermline.

The site closed in 2010, following a relocation to Fishcross near Alloa, and The Scottish SPCA hopes to realise funds from the sale of the former wildlife centre to CALA Homes.

Derek Lawson, Strategic Land Director at CALA Homes (East), said: “Derek and Jackie have both been brilliant in their fundraising work for Pound for Paws – we’re very proud of them and all of their hard work.”

For more information on the Scottish SPCA, please visit: https://www.scottishspca.org/ and https://www.cala.co.uk/about-cala/news-and-media/2020/09/cala-supports-the-scottish-spcas-first-entirely-online-event

Are you looking for some Edinburgh PR to help boost your business? Our team of experts are here to help