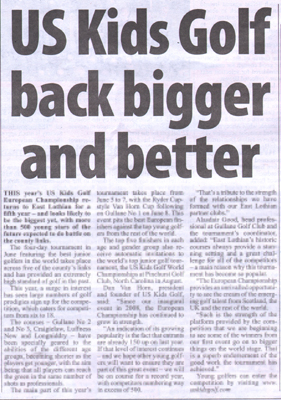 This year’s U.S. Kids Golf European Championship is returning to East Lothian for a fifth time.  The competition is set to be bigger than ever and over 500 young golf stars will compete over the four day tournament.

The championship will take place on multiple courses, including Gullane No 2 and No 3, Craigielaw, Luffness New and Longniddry, and will host competitors between the ages of 6 and 18.

Don Van Horn, president and founder of U.S. Kids Golf said: “Since our inaugural event in 2008, the European Championship has continued to grow in strength.

“An indication of its growing popularity is the fact that entrants are already 150 up on last year.”

Alasdair Good, head professional at Gullane Golf Club and coordinator of the tournament added: “East Lothian’s historic courses always provide a stunning setting and a great challenge for all of the competitors – a main reason why this tournament has become so popular.”

“The European Championship provides an unrivalled opportunity to see the cream of the emerging golf talent in Scotland, the UK and the rest of the world.”

This coverage was secured on behalf of U.S. Kids Golf, thanks to the PR expertise of The Holyrood PR.