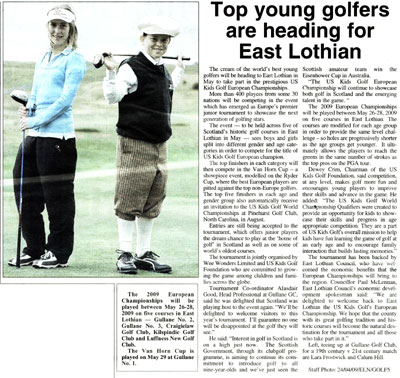 East Lothian youngsters Callum Hill and Lara Frostwick have enjoyed even more media coverage – turning them into local celebrities in the name of the 2009 U.S. Kids Golf European Championships.

The pair, aged 13 and 14 respectively, helped launch the 2009 tournament by playing in a special old vs new match with Callum dressing up in 19th century golf attire and using hickory clubs against Lara with all the modern trappings and equipment.

They played a match at Gullane GC, one of the venues for the 2009 tournament, to celebrate the fact that more than 400 young golfers from some 30 countries across the world are travelling to East Lothian to take part in May.

It adds to the growing list of positive press coverage and publicity following a successful media campaign by Holyrood PR.