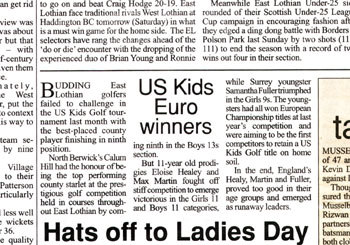 A leading East Lothian newspaper has brought another PR success for U.S. Kids Golf after publishing the results of the European Championship.

The East Lothian Courier ran an article about how young golfers had performed at the tournament, which was held on five courses in the region last month.

The tournament – which has been described as the equivalent of the Open Championship for children aged between 5 and 14 – saw more than 430 players from 34 countries compete on the links in East Lothian. Competitors battled it out for the title of European Champion, as well as places at the World Championship in Pinehurst.

The full coverage appeared in the East Lothian Courier and came as the result of a prolonged media campaign by Holyrood PR PR in Scotland.