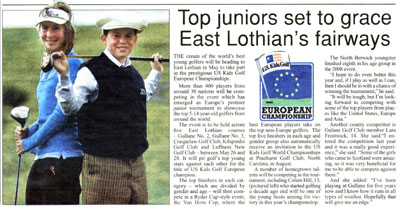 The East Lothian Courier has previewed the 2009 U.S. Kids Golf European Championship by featuring two local youngsters who launched the event with an unusual match-up.

The were helping to launch this year’s event which returns to East Lothian from May 26-28 following a hugely successful first outing last year.

They will take on more than 400 youngsters from 30 countries worldwide over five of East Lothians most historic courses for the title of U.S. Kids Golf European Champion.

The back page article, headlined – Top juniors set to grace East Lothian’s fairways – also featured Calum and Lara talking about their chances for the event.

Calum, who finished eighth in his age group in last year’s event, said: “I hope to do even better this year and, if I play as well as I can, then I should be in with a chance of winning the tournament.

“It will be tough but I’m looking forward to competing with some of the top players from places like the United States, Europe and Asia.”

Lara added: “I entered the competition last year and it was a really good experience. Some of the girls who came to Scotland were amazing so it was very beneficial for me to be able to compete against them.

“I’ve been playing at Gullane for five years now and I know how it runs all in types of weather. Hopefully that will give me an edge.”