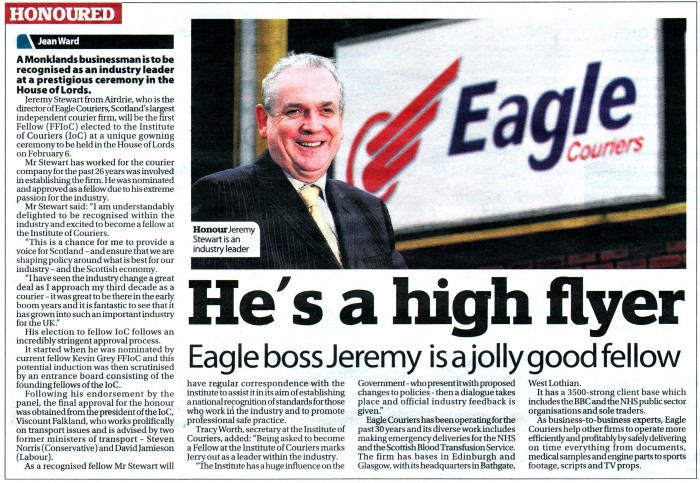 With Jerry Stewart of Eagle Couriers set to become the first Fellow to represent an independent Scotland-based firm in the Institute of Couriers (IoC) today, Holyrood PR were sure to share the story with the press.

Jerry has worked for the West Lothian based courier for 26 years and was involved in establishing the firm. He was nominated and approved as a Fellow due to his passion for the industry. 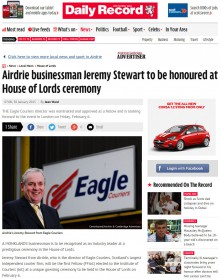 Jerry’s election to Fellow IoC followed an incredibly stringent approval process. It started when he was nominated by current Fellow Kevin Grey FFIoC. It was then scrutinised by an entrance board consisting of the founding Fellows of the IoC. Following the panel endorsement, the final approval was then gained from the president of the IoC, Viscount Falkland, who works prolifically on Transport issues and is advised by two former Ministers of Transport – Steven 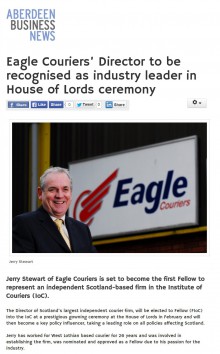 Regional newspaper Airdrie and Coatbridge Advertiser were first to feature the story, followed by The Fife Business Journal and all of the Scottish Business News web pages (Aberdeen, Highland, Lothian, Strathclyde and Tayside) reaching readership from all around the country. The Daily Record also featured the story on their website.

Holyrood PR works with Eagle Couriers to share their many success stories with national, regional and online press.