Eagle Stays In The Right Lane 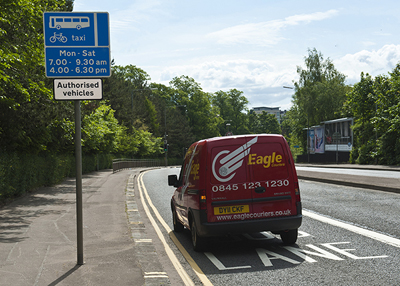 An influential figure from the transport industry is keen to open up negotiations with local government following recent measures introduced to bus lanes.

The director of one of Scotland’s largest independent courier companies has expressed his concerns over the recent enforcement of cameras on bus lanes in Edinburgh and Glasgow and is urging local councils to rethink the decision.

Jerry Stewart from Eagle Couriers is pioneering the idea that courier companies could negotiate with councils on the use of the greenways, by suggesting an annual fee which would cover delivery drivers travelling in them.

He said: “The recent measures that were introduced by the Scottish Government on the city’s greenways have certainly caused outcry from road users in particular those who rely on the road every day.

“As a company which operates within the transport industry we realise how important it is for local government to enforce rules on the road to ensure that vehicles such as buses and taxis have a fair advantage of getting where they need to go.

“So many people rely on these transport services every day and it is clear that there should be certain rules in place to allow them to operate fully.”

Jerry who has over thirty years in the courier industry advises that although these greenways are in place for a reason, there should be fewer restrictions for those who work from the road.

He said: “I think it’s about time that we look to alternative ways in which we can utilise these bus lanes without causing travel chaos.

“Our job as couriers is a fast paced one and for us in which our core business is same day deliveries being able to use the greenways would be of great help to improve our carbon footprint.

“It would be great if we were able to discuss with the government ways in which courier companies could be using the greenways and in exchange we could negotiate something like an annual fee.

“We would be more than happy to pay an annual fee to use the bus lanes if it meant we were able to beat some of the heaviest traffic in some of the busiest cities like Edinburgh and Glasgow.

“Let’s hope that local government’s listen to what drivers are saying, it may provide an extra income for councils at a time where budgets are being cut all the time.”

Eagle Couriers is Scotland’s leading courier firm with over 30 years’ experience. More information about the company can be found at www.eaglecouriers.co.uk