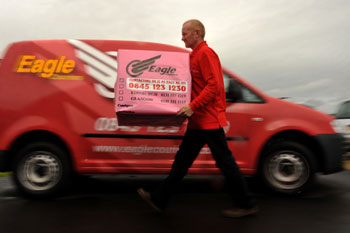 Young football fans taking part in Falkirk FC’s summer-long soccer camps have been given the chance to put their hands on the SPL Champion’s trophy – thanks to Eagle Couriers.

The Scottish Premier League have given Falkirk the SPL trophy once a week, allowing them to have the 1000 children taking part in the football summer camps pictured with the famous cup.

While the rest of the week has seen the children passing the ball, Eagle has been couriering back and forth with the SPL trophy to ensure no child feels left out.

Head of Community Coaching at Falkirk Tom Elliot said: “It’s fantastic. The SPL let us use the trophy one day a week so all the children taking part in that week’s summer camp can have their picture taken with it.

“It’s great for the children because a lot of them have only ever seen the trophy on TV and this gives them a chance to see it and feel it – and is hopefully a warm-up for them holding it in their professional careers if they become full-time footballers.

“Once the children have had their pictures taken, the courier from Eagle takes it back to the SPL until the following week when a new group of footballing students comes along.”

Eagle Couriers is Scotland’s leading independent courier company and has bases in Edinburgh, Bathgate and Glasgow. It delivers everything from office documents and sensitive data to equipment for filming crews and even a canoe.

Eagle Couriers’ Director Jerry Stewart said: “There’s been a bit of a football theme for us recently between this job, delivering the league trophy to Rangers and other courier work to and from Hampden.

“It’s gratifying to know that authorities like the SPL trust us with their most valuable possessions. If our hands were any safer, we’d be asking for trials with Falkirk during their summer camps!”