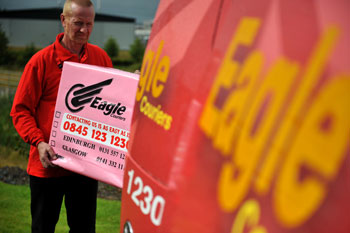 Eagle Couriers, which has bases in Glasgow, Edinburgh and West Lothian, agreed to make an 11th-hour special delivery for the charity Project Ability in order to ensure the success an unusual fundraising event.

Project Ability, which is currently relocating to new premises in Glasgow, had planned a special roller-disco to help raise money for new equipment to aid its work with children and adults with learning disabilities, and adults with mental health issues, across Scotland.

Designed with an “old school” theme, the disco involved performances from some of the city’s popular DJs and guests would be given the chance to skate with original 2×2 roller boots – called quads – as well as the modern blade variety.

But after being offered a selection of vintage roller boots from a company in England, the charity found that time was running out for them to arrange for the equipment to be delivered up to Scotland.

And organisers were concerned the event would have had to be scrapped, until Eagle Couriers stepped in and agreed to pick up and deliver the boots for free.

Kara Szifris, development manager with Project Ability, said: “We really can’t stress enough how much Eagle Couriers has helped ensure that our event is a success. We are a small charity and the event was being supported almost entirely by volunteers. We hoped to find someone who would lend their support and help us get the boots up from Leeds, so Eagle Couriers’ help has been vital.

“We were lucky enough to be offered a selection of roller boots free of charge for the disco from a company in England called Skate Fever. We were delighted, because it meant that we would be able to have an authentic old-school theme.

“But we then found out that we would have to arrange for the boots to be transported up to Glasgow. Time was running out and everyone was working flat-out to organise the event, so there just wasn’t enough notice for any of our volunteers to drive down and pick them up.

“The boots were a vital part of the event so thankfully Eagle Couriers stepped in and offered to pick up them up for free, which helped save the day. Without their help, our fundraising event would not be happening.”

The free delivery is the latest in a string of charity initiatives that directors at Eagle Couriers have carried out in the past 12 months. Earlier this year, the firm ran a “special deliveries” initiative designed to provide equipment for under-funded community organisations across central Scotland.

The company has also picked the Five Sisters Zoo in West Lothian as its sponsored charity for 2009, and has helped raise money and awareness for the under-threat wildlife attraction.

Jerry Stewart, one of Eagle Couriers directors, said: “We always try to give something back to the local communities that we work in, so when we heard about Project Ability’s dilemma we jumped at the chance to help.

“It is a charity that performs a lot of good work in Glasgow and the rest of Scotland, and helps support many children and adults with learning disabilities. The fundraising disco was a major event for them and they were extremely worried that they would have to cancel it at the last minute because they could not get the boots delivered.

“Once we knew what the problem was, we were delighted to offer a free delivery down to Leeds to collect the boots, and to take them back south after the event is finished. We hope that their roller disco will be a tremendous success and enable Project Ability to continue its important charity work in the city.”

Eagle Couriers is Scotland’s leading independent courier company, with almost 30 years’ experience and employing 100 staff between its bases in Glasgow, Bathgate and Edinburgh.

The firm has a 3500-strong client base ranging from blue chip firms such as the BBC and BT, public organisations including the NHS, and sole traders. As business-to-business experts, Eagle Couriers helps other firms operate more efficiently and profitably, by safely delivering on time everything from documents, medical samples and engine parts to sports footage, scripts and TV props.

Project Ability is Scotland’s leading visual arts charity and has more than 25 years experience of supporting children and adults with disabilities and people with mental health issues – allowing them to discover, develop and fulfil their creative potential.