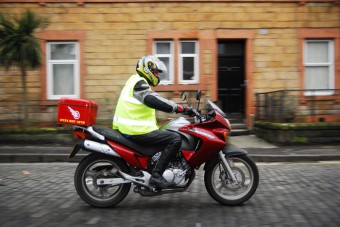 Scotland’s leading courier company is expecting to buck the credit crunch by delivering a bumper batch of cards and gifts this Valentines Day.

Eagle Couriers, which employs more than 100 people between its bases in Glasgow and Edinburgh, has already taken dozens of enquiries from love-struck customers eager to ensure that their Valentines gifts are delivered on February 14.

The firm is even predicting a 20% rise in the number of Valentines deliveries it will make compared to last year, which staff believe is a result of customers saving money by shunning more expensive romantic gestures, such as going out for a meal at a restaurant.

Jerry Stewart, one of Eagle Couriers directors, said: “Although people are being cautious about how much they spend in the current economic climate, it looks like Valentines gifts and cards have not been affected this year.

“We’ve already taken a lot of enquiries from people who want to make sure their bouquets of flowers, cards and other Valentines Day presents arrive on time, so we’re expecting to be very busy.

“It seems that while people are more likely to cook a romantic meal at home rather than going to a restaurant, they still want to send gifts to their loved ones.

“There are always people who leave their presents until the last minute and rely on courier companies to make ‘same-day’ deliveries, so we expect to take on a lot more Valentines jobs over the next week or so.”

Eagle Couriers has a 3500-strong client base ranging from blue chip firms such as the BBC and BT, public organisations including the NHS, and sole traders.

The talented team delivers everything from documents, medical samples and engine parts to sports footage, scripts and TV props on time, and in an ethical fashion.

He said: “Last year, we delivered a package for one lady who had no idea who it had come from. She was desperate to know who had ordered the delivery and begged us to tell her, but we had to politely refuse her request.

“We have strict confidentiality policies in place and there is no way we could have revealed that sort of information – but it would also have ruined the surprise and the mystery of Valentines Day if we had.”