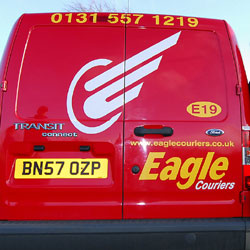 Scotland’s leading independent courier firm has hired a specialist design company to help solve a shortage of red vans in its fleet.

Eagle Couriers has enlisted the help of Glasgow firm Rapido Print & Design to create a new set of vehicle decals that will be used to help its 100-strong fleet expand across the country.

The move has been prompted by a recent Europe-wide shortage of red vans, which resulted in Eagle Couriers being unable to purchase new vehicles to add to its distinctive red-liveried fleet. The shortage was fuelled by the recession, which had led to a huge surplus of unsold white vans across Europe and meant that production of red vans had dwindled.

Under the new deal, the team from Rapido has created a special red wrap – complete with the distinctive Eagle Couriers livery – which it has installed on a standard white van.

Directors at Eagle Couriers are now considering installing the wrap on other new vehicles for its fleet, rather than waiting for manufacturers to begin making red vans again.

Jerry Stewart, one of the firm’s directors, said: “There’s no doubt red vans are much harder to find now than at any point in our 30 year history, so we have had to be more creative with our plans to expand the fleet.

“We quickly realised that bringing white vehicles into the business wasn’t a good option, as our red liveried vans are an integral part of our branding. It would have been a mistake to bring white vans in, as it would have made our fleet look like a messy mix-match of different vehicles.

“We’ve worked hard to build up our brand and ensure customers across Scotland recognise our distinctive vans, so we don’t want to lose that position due to reasons outwith our control.

“We’ve therefore decided to see whether we could put a red wrap – complete with our distinctive livery – around a white vehicle instead. At the moment, it’s just a one-off experiment but it means that we now have a solution if the red van shortage continues for the foreseeable future.

“It’s a more expensive process than just buying a red van, but we know that in the long term it will be well worth it to keep our well-known look. Our red vans have featured in TV shows and can be easily spotted in most cities in Scotland, so it would be daft to throw away 30 years of goodwill.

“Hopefully this experiment with the red decals will give us another option to consider and ensure that there are fewer hurdles to navigate when we continue to expand our business in the future.”