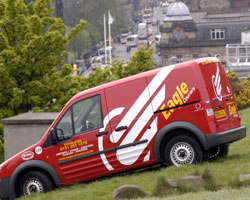 With the credit crunch still hitting hard for many, some firms are trying for the cheap option when it comes to delivering packages, documents and other items. And while this may seem cheap in the short term, there are many long-term dangers.

If an uninsured company breaks, destroys or loses an item, there can be no comeback – and while it may mean nothing for the cowboy courier firm, it could be catastrophic for the company who hired them. That’s the warning by Scotland’s largest independent delivery firm Eagle Couriers.

Jerry Stewart, one of Eagle Couriers’ directors, said: “When times are tough it can seem like a quick cheap option to just go with the lowest bid. But if that lowest bid is from a company not regulated or properly insured then what happens when things go wrong?

“It’s all very well to say that 99 times out of 100 things will be fine, but what if that one time there is an accident, it involves a highly expensive piece of machinery or valuable documents? What if a deadline is missed?

“The cowboy firm aren’t going to give a damn, but for the company who hired them, it could be a very costly mistake in terms of business and reputation.

“It’s also a false economy in another sense because fully insured companies like Eagle are every bit as competitive in price with these cowboys – and you have the peace of mind that comes with knowing your goods are protected.”

National body, the National Couriers Association backed the calls. Spokesman Tim Wilson said: “By not going with people who are registered with the NCA, companies can be taking a risk – delivery times can be missed, there’s no benchmark or guarantee of quality.

“It can even be something as simple as a courier guaranteeing a delivery by a certain time and they blow it. Now if the delivery is a tender for a job and the deadline’s missed, then that can be a big job gone because of the cowboy courier.

“And it’s not just about the insurance. Before joining the NCA a firm has to sign up to our strict code, be vetted and credit checked.

“Companies who go with cowboys can be taking an awful risk.”