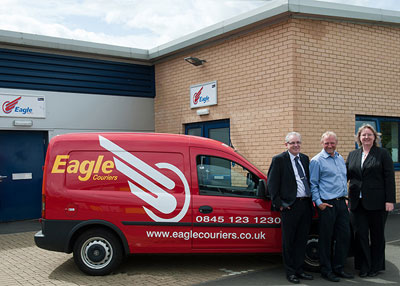 As many companies struggle in the midst of a double dip recession, one of Scotland’s largest independent courier companies has managed to smash its sales target for this year.

Eagle Couriers which was established in 1985 exceeded its £3m turnover target after managing to increase its client base as well as maintain and extend contracts within the private and public sectors.

Eagle’s client base rose by a further 20% this year bringing client numbers to around 4000.

Fiona Deas, Director at Eagle Couriers, attributes this year’s success to the company’s value for money ethos as well as the rise in public sector work the firm is handling.

She said: “We are delighted to have reached our sales target for the financial year of 2011/2012. We have all worked extremely hard over the last year and our efforts have obviously paid off.

“As well as our client base going up by 20%, we have also won a couple of new contracts which have also allowed us to take on new members of staff.

“So far we have taken on fourteen new members of staff this year, adding to our current team of 110. Continuous recruitment has been a key sign that the business is going in the right direction.

The firm is also well on track to reach its target annual turnover of £5m by 2014 after growing it’s public sector customer base by 40% last year.

Fiona continued: “It is great that we have managed to win so many new contracts within the public sector. I think the realisation for them is that it is cheaper to outsource things like couriering than to do it In-house like they normally would.

“Our success within the public sector is definitely down to the value for money element that we bring to all of our services as well as the fact that we are now one of the only independent courier companies in Scotland.

“We have kept our target for 2014 just as ambitious as this year’s and hope that we continue the great work we are doing across both the public and private sectors.”

The firm which has bases in Edinburgh, Bathgate and Glasgow counts BT, BBC and Scotland Excel amongst some of its clients has plans to add a further 12 vehicles to its already strong fleet of 90 vehicles and has already added two staff to take its head count to 124.

This coverage was secured with the Scotsman as part of a sustained PR campaign carried out by Holyrood PR on behalf of Eagle Couriers.