Scotland’s leading independent courier company Eagle Couriers has criticised the government’s plans to raise fuel duty to cover the drop in VAT, which was announced in the pre-Budget report.

Under proposals revealed by Chancellor Alistair Darling, VAT will be reduced from 17.5% to 15% in a bid to stimulate the economy and help businesses across the UK during the run up to Christmas.

But the Chancellor has also announced that he will raise the duty on fuel to cover the cut in VAT – meaning that customers will see no benefit whatsoever at the pumps.

Eagle Couriers has criticised the decision, which it says will be unfair on delivery businesses and motorists during the festive season and beyond.

Jerry Stewart, one of Eagle Couriers’s directors, said: “I am very disappointed with the Chancellor’s decision to raise duty on fuel to offset the drop in Value Added Tax. He has pledged to help businesses across the UK but this is a blow to companies such as ours since, although we are a registered firm that is able to reclaim VAT, we are unable to claim back any rise in excise duty.

“Petrol is still very expensive at the pumps and motorists were hoping the Chancellor would give them some Christmas cheer by lowering prices. However, with this pre-Budget announcement, he has merely given with one hand while taking away with the other.

“If Mr Darling was serious about stimulating the economy and helping businesses during the run-up to Christmas he would have at least dropped the duty on diesel, which is currently far more expensive than petrol anyway.

“Almost all delivery firms, couriers and hauliers use diesel in their vehicles and, if prices had been reduced, this saving would have been passed on to customers in time for their Christmas deliveries.” 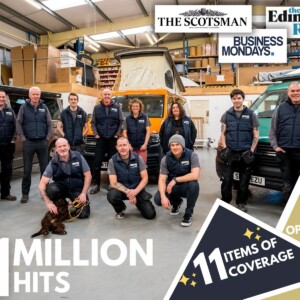