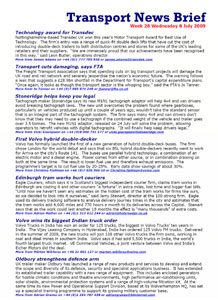 The company explained that the tram works are adding costs in terms of extra mileage, lost time and bigger fuel bills.

Transport News Brief quoted Jerry Stewart, director of Eagle Couriers, as saying that as tram work is set to last another 18 months the effect will be “many thousands” of extra costs.

The full story appeared in the Transport News Brief and was part of a media campaign by Holyrood PR, PR in Scotland.