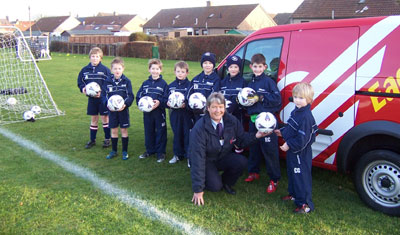 Scotland’s leading independent courier firm has honoured a charity pledge in East Lothian – by making a special donation to a youth football club.

Eagle Couriers has provided Aberlady kids football club with a brand new set of balls, after the club was chosen as the lucky recipient of one of its “special deliveries”.

Under the charity scheme, which was launched last month, community groups and small charities across the Lothians were encouraged to apply to Eagle Couriers and explain what gift they would need to improve their work in their local area.

And now, after receiving requests from community groups across the Lothians, the firm has decided to lend its support to the Aberlady club.

The “special delivery” has seen Eagle Couriers donate a new set of balls to the club, which they needed following an SFA decision over the size of footballs that youth teams can use.

Jerry Stewart, one of Eagle Couriers’ directors, said: “We had a lot of requests from community groups, projects and charities across East Lothian for a special delivery. Many were asking for funding and equipment to help with their work, and we could have chosen any one of them.

“However, we were really impressed with the Aberlady football club. They provide a great service to young people in the area and highlight the need for children to keep healthy and active, which is a very important message these days.

“The club helps coach youngsters between the ages of four and 12 and they do a remarkable job. However, because of a recent SFA decision to make children use lighter, smaller “size three” balls when they play matches, they found they did not have the right equipment and contacted us to see if we could help them.

“Hopefully by delivering these new balls, we will have helped the club continue to carry out their work in Aberlady and their vision to keep young people in the area interested in sport.”

Eagle Couriers employs 100 people between Edinburgh and Glasgow and regularly delivers medical equipment and sensitive data across East Lothian for clients including the NHS, BT and the Scottish Government.