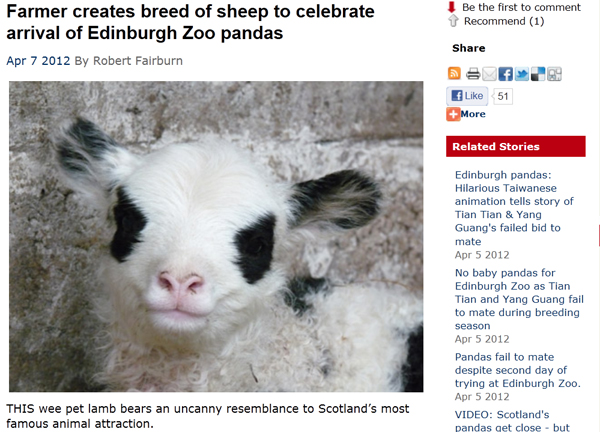 After the panda’s failed to mate at Edinburgh Zoo everyone was a bit disappointed. It turns out they shouldn’t be as a farmer has tried to fill the void of baby pandas by creating a breed of sheep that is uncanny to the bears. Jill Noble from Carlops in Peeblesshire is refusing to name the breed of the sheep but tells the Daily Record that there is a bit of Icelandic and Scottish in there. Check out the panda lambs here, the farmer is hoping that his sheep can teach the pandas a couple things about mating…http://www.dailyrecord.co.uk/news/weird-news/2012/04/07/farmer-creates-breed-of-sheep-to-celebrate-arrival-of-edinburgh-zoo-pandas-86908-23816626/

THE SUICIDE FOREST OF JAPAN (Aimee)

Yesterday I wrote about the waiter monkeys of Japan-amusing but also a little exploitative! Another recent story which was covered in Justin Lee Collins’ exploration of Japan is that of Aokigahara forest-otherwise known as Suicide Forest! Japanese geologist Azusa Hayano takes a film crew from Vice World deep inside the hauntingly sad forest to share what he’s learnt and we hear that due to the nature of his work he is often faced with the grim reality of finding suicide victims and estimated that he has found 100 bodies in the past twenty years. Although this video is chilling-graphic images included-it is undeniably fascinating! We see possessions left behind and can almost gain an insight into what those were thinking when they entered the forest! http://www.youtube.com/watch?v=6CK1KdAha78&feature=player_embedded

It’s easy to get caught up in the social media bubble. None of my family or oldest friends use Twitter, let alone newer, more niche services like Pinterest, or Instagram. So I suppose lots of people will be oblivious to today’s news that Facebook has splashed out £1 billion to buy iPhone photosharing service, Instagram. One Forbes writter reckons this is to protect Facebook against the rising threat of ‘pinning’ service, Pinterest. Other tech writers claim Facebook was actually more scared of Instagram itself. Yadda, yadda. What really interests me is what Instagram founder Kevin Systrom will do with the $400 million he just pocketed…
http://www.businessinsider.com/meet-kevin-systrom-a-qa-the-28-year-old-who-just-sold-his-startup-to-facebook-for-1-billion-2012-4

YOU KNOW WHEN YOU’VE BEEN TANGO’D (Lewis)

Whenever you go on holiday there is always that one elderly person who has sat out in the sun for the last 20 years and has a tan than can only be described as a burnt look. But normally, getting a tan was usually a thing you got when you go on holiday, however more and more people are using fake tan for nights out or everyday general use. Some say having a tan makes you look slimmer…some of these people in this article don’t look slimmer!  These snap shots of tanning or fake tanning gone bad are just what we need on a cold and rainy day like it is today. Both male and female culprits who have posted photos of themselves with embarrassing tan disaters.  http://www.dailymail.co.uk/news/article-2127532/Beyond-pale-Website-offers-look-worlds-terrible-tans.html

THE BUS THAT CURES HANGOVERS (Victoria)

There is no worse feeling than being hungover, it completely floors you. So when I read of this ingenius invention, I thought, what a wonderful idea, please come to Edinburgh! An anesthesiologist in Las Vegas has come up with a new IV procedure to rid the nasty toxins in your body, administered on specially adapted bus called ‘Hangover Heaven’. The concoction is made from a formula of vitamins, medications and amino acids and he claims it can cure 90% of hangovers in about 45 minutes. http://hangoverheaven.com/

Links with a recent past brings the best out of Boroughmuir

Links with a recent past brings the best out of Boroughmuir